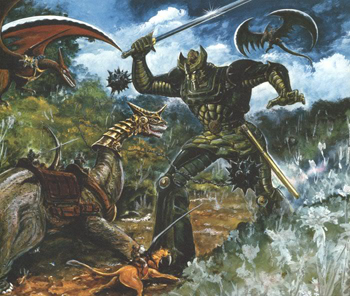 God Mazinger (ゴッドマジンガー, Goddo Majingā), also known as Majin Densetsu (魔神伝説) is an anime, manga and novel series created by Go Nagai. Initially it was to going to be the sequel to Mazinger Z, but the idea was scrapped in favor of creating Great Mazinger and UFO Robo Grendizer, and the concept was fully reworked until it had nothing to do with the original series (still, it is counted between the Mazinger series). The TMS-helmed anime aired in 1984 in Nippon Television with 23 episodes. The manga was originally published in tankobon format by Shogakukan in 4 volumes published in 1984. The novelization was published in 1984 and lasted 10 volumes. The three of them share the same basic premise but have a different story.

Hibino Yamato/Yamato Hino is a Japanese Ordinary High-School Student one day begins to see visions of a strange world and feels something is calling him to a place named Mu. Frightened and confused, Yamato thinks that he had hallucinations.

However Mu is a real place, an ancient kingdom located in another dimension and whose civilization reminds of the ancient Greece and Rome.

The Kingdom of Mu is ruled by King Muraji and his daughter Princess Aira, and it is being attacked by the Dragonia Empire, ruled by Emperor Dorado and his son, Prince Eldo. His army of dinosaurs is assaulting the borders of Mu, and it is a matter of time until they overcome the defenses of the kingdom. Mu has a powerful weapon: God Mazinger, a gigantic stone statue. It is said the ancient god stands ready to defend the population of any threat. Unfortunately, it is sleeping and it only can be awakened by the chosen one.

Finally the dinosaur army breaks through the borders and invades the kingdom. Like a desperate, last-resort measure, the king and his court pray before the statue of the god Mazinger to find the chosen one: a brave boy whose name is Yamato.

Back on Earth, during a thunderstorm, an inter-dimensional portal opens before Yamato, and a lightning bolt strucks him, dragging him into the parallel world where Mu is located. Suddenly the statue of the god relives. A luminous beam covers Yamato, and he is absorbed into the body of the statue. God Mazinger begins to move and defeats the invading dinosaurs, making the army flee.

Yamato joins the court of King Muraji, becoming the champion of the Kingdom of Mu, always ready to repel the attacks of the evil Dorado and his fearsome dinosaurs.

God Mazinger had not too much success, and it is little known among Mazinger fans. However it has shown up in other media. Its most prominent appearance happened in the "Dynamic Super Robots Taisen" clips that were included at the end of the DVDs of Shin Getter Robo vs. Neo Getter Robo.

In the Mazinger Angels manga, there is a saga dedicated to God Mazinger, where Princess Aira appears controlling a female version of God Mazinger and with the help of Jun Hono defeats the Mykene Empire Army menacing the kingdom, after Jun and Prof. Nonaka accidentally end up in the Kingdom of Mu. It is later with the help of Aira that Venus A becomes Queen of Gold.