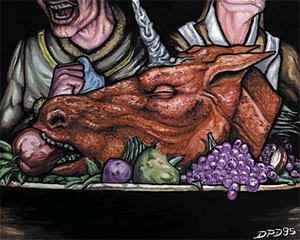 "Some delicacies are not to be savored, save by the callous."
— Baron Sengir, Magic: The Gathering
Advertisement:

So a character relishes the outcomes of their evil actions. Maybe they stew in their own evil juices. Perhaps they are the kind that has a menu of dastardly deeds to choose from, or maybe they've just got a select few on speed dial to take-out.

I'm hungry. We got anything eeeeeevil to eat? Yes, Reptiles Are Abhorrent, but that's just for a pet. Or my Final Form. There's no evil animals? Damn, I'll have to do the next best thing: eat something that makes me more evil for even thinking it.

Bad people thus eat the meat of exotic animals, especially those that are endangered. The concept is generally that they are so heartless, they would help a species go extinct or sink their teeth into something that's generally considered a rare beauty when they could just as easily get some chips. Fridge Logic issues as to how they'd know how to cook an exotic animal they'd never tried before, or that it wouldn't taste like crap, seldom come up.

Or maybe not necessarily something endangered: perhaps the animal in question is just generally regarded as beautiful or adorable (a Right-Hand Cat may fall victim into this, especially if they lost their usefulness). Alternatively, the dish to prepare it requires some form of twisted, sadistic torture and suffering to the animal, that the very idea of eating such a dish comes off as downright evil.

Since different cultures and ethnic groups have different food cultures and food taboos, this trope is often invoked in propaganda to either lampoon or demonize opposing groups.

Overlaps quite nicely with the Evil Poacher, and is often the meal of the Card-Carrying Villain. For the clothing equivalent, see Fur and Loathing. If the exotic animals are consumed because they get people high and/or confer special powers to the eater, that's Mainlining the Monster. Related to Haute Cuisine Is Weird.