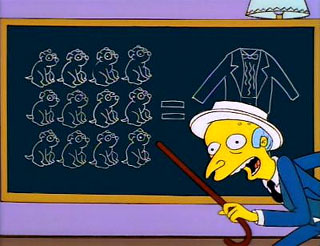 For my sweater, there's no better, than authentic Irish setter!
"Beauty is only skin deep. My beauty, your skin."
— Gotcha Grabmore, Tiny Toon Adventures
Advertisement:

Someone who delights in animals' suffering when used to make food and clothing from them. Someone who prefers any product which required an animal to die. Fur is not for warmth, style, or just enjoying how it feels, it's because they know innocent creatures died for it. Or if makeup is tested on animals, it's not better because of any supposed advantages to the testing, but because these people know that their hair spray has also hurt innocent creatures. Meat is not merely a valuable source of protein, but it's delicious because an animal died.

Some Evil Poachers are driven more by a hatred of animals (or possibly one particular animal) than profit — especially in cartoons. Will most likely not include Hunting the Most Dangerous Game in case you're wondering.

This trope is seldom Truth in Television. Sadists who hurt animals directly tend to move on to hurting people, and people who wear fur or eat meat are mostly not doing so for sadistic reasons. Most animal rights activists don't believe this is true either, as they bank on people's compassion in many of their campaigns — not that that stops them invoking this trope in said campaigns.

A Sub-Trope of Strawman Political, though it can be used simply as a Card-Carrying Villain.