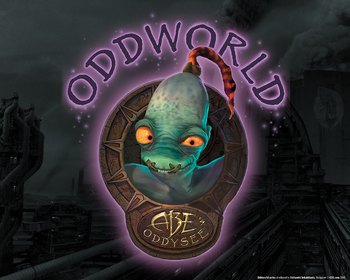 *Pffft!* Heheheh.
The Glukkons were scared 'cause profits were grim.
Paramites and Scrabs had been turning up thin.
But Molluck was cool; he had a plan.
This new kind of meat? IT WAS US!
— Abe's Oddysee and its remake New 'n' Tasty
Advertisement:

In Oddworld: Abe's Oddysee (1997), the first game of the unfinished Oddworld Quintology, Mudokon cleaner Abe spies on an executive board meeting at RuptureFarms, a slaughterhouse/factory, where he learns profits are dwindling due to livestock sources reaching extinction. The execs, known as Glukkons, decide then and there that the way to drive profits up is to chop up the Mudokon slaves they have cleaning the factories. Naturally terrified, Abe escapes from RuptureFarms 1029 while rescuing as many of his fellow slaves as possible and, after meeting native Big Face, Abe must save the remaining wildlife, regain a lost ancient power, and return to RuptureFarms to liberate his people.

Oddworld: Munch's Oddysee (2001) is the third overall game and also the second chapter of the Quintology. The game introduces Munch the Gabbit, who is the Last of His Kind. Gabbits are hunted to the brink of extinction for their eggs (sold as product Gabbiar) as well as their lungs. Munch is captured by a species of mad scientists known as Vykkers (whose existence was briefly foreshadowed in Abe's Exoddus), but escapes and teams up with Abe in an attempt to infiltrate Vykkers Labs, manipulate the Glukkons, win the last remaining can of Gabbiar in existence through an auction, and rescue the remaining Mudokons. Not only is it the first 3D game in the series, Munch's Oddysee introduces an additional race for saving (the Fuzzles), allows the player to control two heroes, lets the Mudokons level up and fight back (to an extent) and adds an anti-animal testing message to its range of anvils.

Oddworld: Stranger's Wrath, like Abe's Exoddus, is a bonus game in the series. Set in a Wild West far from RuptureFarms, the story follows a bounty hunter called "Stranger" as he tries to make enough cash for a mysterious, life-saving operation. Released as an expansive title,note Since the Abe games are all set on continent Mudos, Stranger's Wrath was made to give an insight into other areas, and wasn't going to count as one of the main quintology games. Stranger's Wrath is more of a First/Third-Person Shooter that gives the player a critter-firing crossbow, as well as a more combat-based (and less platform-based) experience.

In mid-2011, the company made an unexpected (but by no means unwelcome) return to the industry, and promptly announced high-definition remasterings of Stranger's Wrath and Munch's Oddysee, which are to be released via digital distribution for PC, PS3, PS4, Vita and Wii U, and developed by British company Just Add Water Ltd.

The Oddworld Quintology was rebooted with a ground-up 2.5D remake of Abe's Oddysee, dubbed Oddworld: New 'n' Tasty!, and was released on July 22, 2014 for PS4 and later for Steam, PS3, Xbox One and Wii U.

A second game in the rebooted Quintology, titled Oddworld: Soulstorm, was released on April 6, 2021. It's a re-imagining of Oddworld: Abe's Exoddus as it was originally envisioned, as opposed to a straight remake like New 'n' Tasty was for Abe's Oddysee.

Examples of the Oddworld franchise are presented here, so sit down and shut up!