Video Game / No One Can Stop Mr. Domino 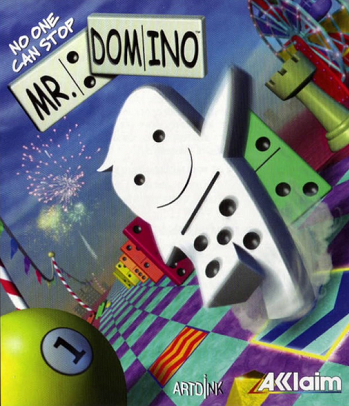 No One Can Stop Mr. Domino is a Puzzle Game developed by Artdink, published by Acclaim, and released in 1998 for the PlayStation.
Advertisement:

You play as Mr. Domino (at least, at first; other characters are unlockable). Your goal is to lay down a line of dominoes throughout some very odd stages. Each stage has a number of action triggers; for the best score, you need to line up your dominoes to hit all of these. All the while, you have to look out for various obstacles (which can hurt you but oddly do nothing to do your dominoes) and power-ups and traps on the ground. Oh, and one more thing: all the while, though you can slow down or speed up, you can't stop moving. After all, no one can stop Mr. Domino.

No One Can Stop Mr. Domino contains examples of the following tropes: