Major species in the Oddworld franchise:

A race of highly spiritual bird-people who are native to the continent of Mudos. Long before the events of Abe's Oddysee they were once a supreme chosen race of Oddworld before Glukkons got jealous and enslaved their kind, forcing them into workforces.

The leading industrial race of Oddworld. After attempting to use black magic and nearly driving their species to extinction because of it, the remaining Glukkons decided to move on to an industrial life, creating the Magog Cartel. Due to their weak state, they generally use Sligs to do the dirty work for them.

A native species of Oddworld, the Vykkers are mad scientist that run the Vykker's Conglomerate alongside the Magog Cartel and specialize in medicine, surgery and artificial preservatives. They are well respected in the industrial ranks thanks to this research, even if it means the torture and extinction of many Oddworld wildlife.

Henchmen and bodyguards of the Glukkons, the Sligs are a race amphibian/cephalopod creatures that reluctantly agreed to pledge their loyalty with the Glukkons in exchange for mechanical gear. Without them and their combat capabilities, the Magog Cartel would not have succeeded in their industrial revolution.

A Sligs' best friend, Slogs are attack dogs that will chase anything down that gets too close or tries to escape.

Native species of Oddworld and inhabitants of Paramonia and Scrabania respectively, the Paramites and Scrabs are highly revered amongst the Mudokon species. In Oddysee, they were being hunted by RuptureFarms to near-extinction until Abe began his journey to shut the meat-processing plant down.

A species of bipedal beasts whom Abe saddles up and rides on in Oddysee.

Small, leech-like species that mostly rests in the vaults of Mudomo and Mudanchee. It was raised by Vykkers to be the "perfect Glukkon pet", but they accidentally added an Overly Long Tongue to it. Fleeches are still kept as pets, but are flushed down a toilet when they become too large to cuddle.

A species of small fuzzballs, the Fuzzles are generally used as guinea-pigs in Vykker experimentation and as stress-balls for executive Glukkons in the industry. Behind that innocent-looking appearance however lies a vicious nature.-

Small, grey creatures with glowing red eyes occupying the deepest parts of The Necrum, though their presence is also hinted at in abandoned mine caves of Sorrow Valley. They're terrified by light, but in darkness they're relentless predators able to kill a mudokon in few seconds. Their guano has healing properties that helps to counter the withdrawal effects of Soulstorm Brew.

Characters that debuted in Abe's Oddysee: 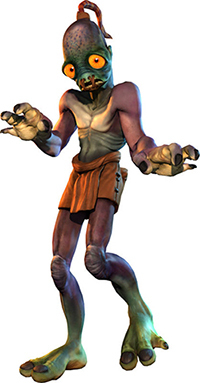 The most iconic mascot of the Oddworld franchise. Abe comes from the native race called the Mudokons and had lived his whole life as a slave worker for RuptureFarms... That is until one night, he discovers RuptureFarms' upcoming "New 'N' Tasty" food product to be Mudokons themselves. After this terrifying revelation, Abe makes a break for it out of the meat processing plant.

Abe later learns from some Big Face that Oddworld's ecosystem has been disrupted by the industry, and is tasked with rescuing his fellow Mudokons as well as shutting down RuptureFarms to restore the land.

Abe becomes something of a messiah amongst his bretheren, and a notorious terrorist to the industry by Glukkons around Oddworld. He's made it his mission to rescue all of the Mudokons in slavery and restore the lost land. 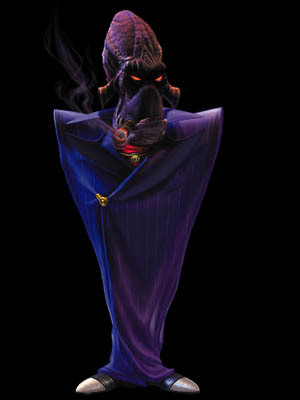 Head of RuptureFarms, member of The Magog Cartel and Abe's boss. Molluck The Glukkon's only desire is to make more and more wealth. To do so he has hunted down The Meeches, Scrabs and Paramites and turned them into Snack Food, driving The Meeches into extinction as a result. When he hears that Scrabs and Paramites are no longer turning up, he decides to make something "New N Tasty", Mudokon Pops out of his own workers and make a fortune off of them. Molluck seemingly died at the end of Oddysee with RuptureFarms' destruction, but it was revealed he had survived and gone into hiding. When learned that he may still live the Glukkon Queen ordered his capture to be put on trial and executed for Abe destroying RuptureFarms. 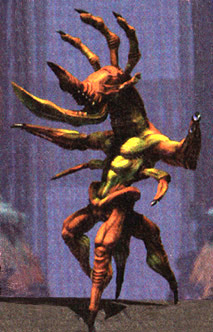 The Demigod of the Mudokons and Abe's Eleventh Hour Super Power.

Characters that debuted in Abe's Exoddus: 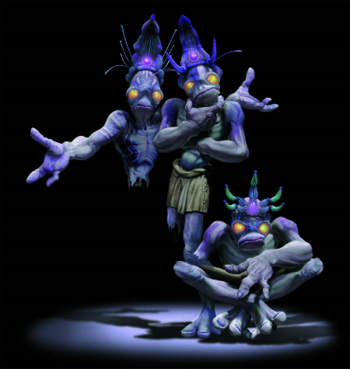 A trio of Mudokon shaman spirits who are naturally upset about their remains being disturbed. They come to Abe in a dream and ask for his help in destroying the SoulStorm Brewery.

The administrator of FeeCo Depot, an industrial transport hub in Mudos. He's also a high-ranking executive of SoulStorm Brewery. He appears as an antagonist in Exoddus and it's reboot Soulstorm.

The officer of the Slig Barracks where new Slig recruits were trained to become corporate security personnel.

The "head boner" of the Bonewerkz, the factory where mudokon bones are ground up into powder to serve as the main ingredient in Soulstorm Brew.

The header of SoulStorm Brewery. In Exoddus he's made the temporary Head of Soulstorm Brewery after Abe kills the Brewery's three top executives, while in the reboot Soulstorm he is the inventor of the Soulstorm Brew.

Characters that debuted in Munch's Oddysee: 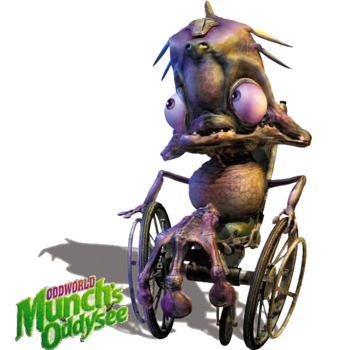 The second character in the proposed "Quintology". Munch is the Last of His Kind. He is captured one day by Vykkers labs mistaking a trap for another Gabbit. He escapes and meets Abe and together, the two work to win the last can of Gabbiar, unborn Gabbit eggs in order to save his race.

A pair of Vykkers scientists. They create and research all kinds of items and products to sell, not caring of any harm or negative consequences it creates for anyone as long as they profit. They're the ones who install Munch's sonar in the beginning of the game.
Lulu

A pathetic Glukkon who's looked down upon by all. Lulu is lazy, dim witted and would rather spend all his time sleeping than doing work. The Almighty Raisin tells Abe and Munch that Lulu is the key to reclaiming the last can of Gabbiar.
The Almighty Raisin

A large seed creature that possesses a wide range of knowledge and wisdom, the Almighty Raisin is an ally and spiritual advisor to the Mudokons, and seeks to restore balance to Mudos.

Characters that debuted in Stranger's Wrath: 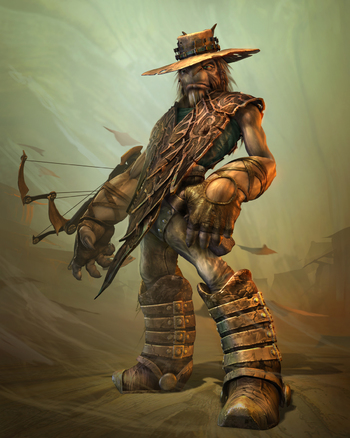 "Well, come and get it"
The main character of Stranger's Wrath.
Sekto

The Big Bad of Stranger's Wrath. Head of Sekto Industries and owner of the power plant that dams the Mongo River.

An outlaw active in the Mongo river region. He and his gang are contacted by Sekto to do occasional work for him.

A Vykker doctor. Stranger needs him to perform a certain surgery on him, and finding money to pay for it serves as the reason to look for all those bounties.

Grubbs' protector and guardian of the river.

Characters that debuted in Soulstorm: 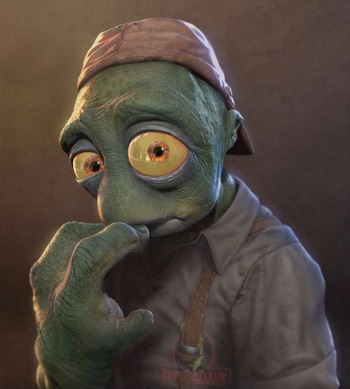 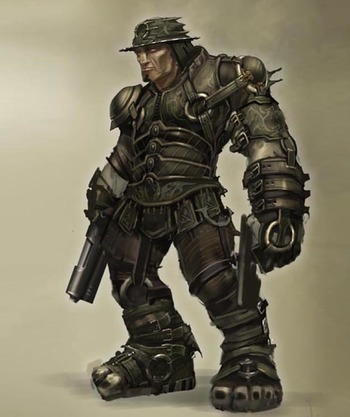 The proposed hero of The Brutal Ballad of Fangus Klot. He was a shepherd. He was captured and forced to compete as a pitfighter before escaping and being infected with rabies. Now he needs to free his home before he succumbs to his rabies. 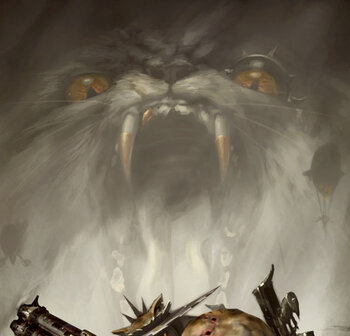 The proposed third protagonist of the Oddworld Quintology. He's an alien of indeterminate origins who has been "evicted" from his body by Vykkers when his organs were repossesed. 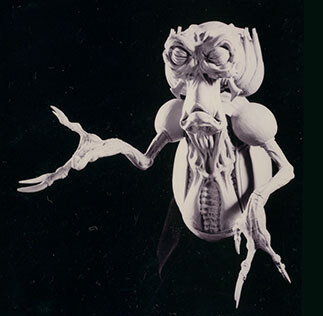 The current Glukkon Queen. Has only been mentioned in the newspaper articles of Munch's Oddysee. 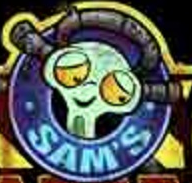 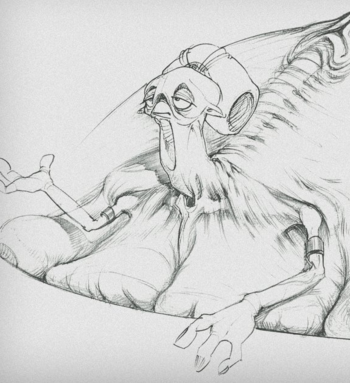 The current Mudokon Queen. She has only been seen as a caricature on the Mudokon egg cartons in Munch's Oddysee. 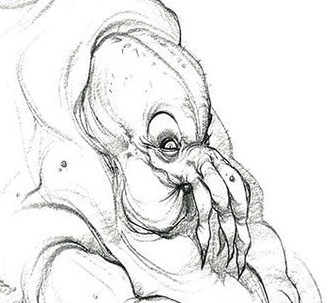