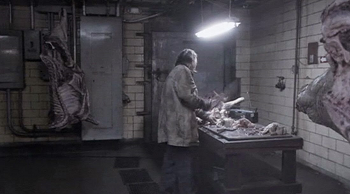 An abhorrent abattoir. Butchering animals and processing them into meat products is a messy business. In fiction, however, this is often played up to even more disturbing levels; most meatpacking plants in fiction seem to be far less sanitary than one would hope for a place that prepares food, shockingly neglectful towards the workers, inhumane in their treatment of livestock, careless in disposing of waste products, or possibly all of the above.

This trope is usually used to illustrate that the people in charge of the place are not nice people - meat apparently being a close third to munitions and pharmaceuticals on the list of industries to which Corrupt Corporate Executives flock - along with promising plenty of Nausea Fuel. And if The Mafia or some other criminal syndicate is in charge of the joint, expect the place to be used as a gruesome means of Disposing of a Body.

Expect plenty of Gorn when one of these places pops up.

This is at risk of becoming a Discredited Trope as modern slaughterhouses are required by both their very nature and by law to be as ridiculously clean as possible. It's not unheard of for a person to walk outside a slaughterhouse and smell nothing but bleach and cleaning agents. As for their wastewater runoff, that's a different story.

A piece of useless trivia: an open-air slaughterhouse is called shambles.

A sub-trope of Nightmarish Factory, and often found hand-in-hand with Mystery Meat. This place easily lends itself to a Slaughterhouse Fight. A Straw Vegetarian might well say all plants of this nature are like this.

Going to the Slaughterhouse

Cow Girl takes her cows in for the night, reminding them that one of them is going to the slaughterhouse the next day.

Going to the Slaughterhouse

Cow Girl takes her cows in for the night, reminding them that one of them is going to the slaughterhouse the next day.