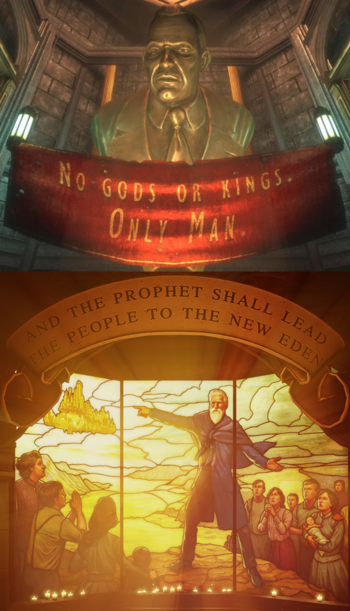 Just as a sequel needs a contrast of heroes with a Contrasting Sequel Main Character, as well as a contrast of locations with a Contrasting Sequel Setting, so do its villains. After all, do we want to see the same battle over again? If the previous villain was a Non-Action Big Bad, make this one a fighter. A Punch-Clock Villain to a personal rival. A man with a troupe to a king in his kingdom. Or an extremist to an opportunist. Even changing genders and upping the Foe Romance Subtext are examples of this trope. At times, it is a case of Avenging the Villain, where the one seeking revenge is more emotional and personal than the cold and calculating original villain.

In cases where the universe becomes more expanded and fleshed out, they may reveal ways in which the previous antagonist's actions affected their lives at times going as far as getting involved into offscreen Evil Versus Evil. This last one is even more likely if there is an ever-present conflict between two different communities/countries/classes and the villains represent rivaling (and perhaps extremistic) factions of the war, unlike the heroes who wish to bring balance and peace to all sides.