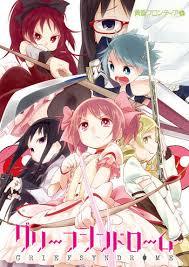 Grief Syndrome is a side-scrolling Beat 'em Up doujin game by Twilight Frontier, the makers of the Eternal Fighter Zero series, the Touhou Project fighting games along with other Touhou fan-games, and Higurashi Daybreak.
Advertisement:

Grief Syndrome is a fan-game based on the anime and manga series, Puella Magi Madoka Magica. In this game, players can play as Madoka Kaname, Sayaka Miki, Homura Akemi, Mami Tomoe, and Kyoko Sakura across five stages to slay waves of familiars and take down the witch waiting at the end of each stage. Unlike most beat 'em ups, each magical girl's life is dependent on her Soul Limit, which also acts a timer as it depletes over time. If a magical girl has taken some damage, she can automatically replenish her Hit Points for some of her Soul Limit, but dying comes at a greater expense in order to be revived shortly after. Once a magical girl's Soul Limit reaches zero, she is dead for good until a new game starts.

The game also features three-player co-op to team up against the horde of surreal monsters they come across. Unfortunately, Grief Syndrome's multi-player is local only, but fans have created a third-party program called "GSOnline" that enables online-play.

The game was released during the 80th summer Comiket in Japan on August 13, 2011 for Windows PC.