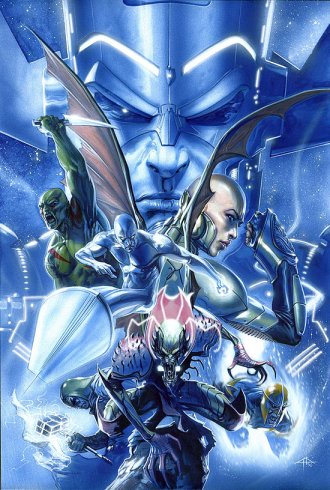 In 2006, Marvel Comics had their big Crisis Crossover Civil War. But this conflict was confined only to Earth and the Marvel Universe contained many, many characters that were space-based. So they had a simultaneous Crisis Crossover just for them: Annihilation.

At the maximum security prison the Kyln, in the area of space known as "the Crunch," a massive armada called the Annihilation Wave destroys nearly everything. Nothing can stand in the Annihilation Wave's path, especially as it destroys one of the first obstacles: the Nova Corps, where Richard Rider, Earth's Nova, is the only survivor. Elsewhere, the Silver Surfer senses an infestation; Kl'rt the Super-Skrull hears rumors of a strange superweapon; Ronan the Accuser becomes the accused; and Thanos has a conversation with Death, who tells him "something wonderful" is going to happen. And as the Annihilation Wave bears down on the universe, at its head is Annihilus who shouts "Annihilus is the will and the way and he will not be denied!"

Annihilation was spread out over a number of mini-series:

In addition, there was an Annihilation: Heralds of Galactus spin-off tying up some loose ends. The fourth volume of Nova spun out of this event.

A few months later there was a sequel: Annihilation: Conquest, which followed the same format as its predecessor, save for the fourth mini-series being replaced by the then-current Nova series. A few months after the Annihilation War has ended, and the universe is beginning to rebuild. Unfortunately, new villains take advantage of the fragmented chaos, and take over the Kree Galaxy, shunting it out of space entirely, leaving only a few heroes capable of fighting them inside.

The fallout of these events would form part of Marvel's subsequent Space Opera crossovers, the War of Kings in 2009, and The Thanos Imperative in 2010, as well as starting off the second volume of Guardians of the Galaxy.

In 2019, another sequel was released: Annihilation: Scourge which along with a concurrent Marvel 2099 event tested a new event format for the company which included an introduction, four one-shots focusing on each of the major characters, and a final "Omega" issue. Years after the Cancerverse's failed invasion of the Marvel Universe, the many angled ones launch a surprise attack in the Negative Zone, forming an alliance with the Sentry, whose Void persona had managed to separate from Bob Reynolds and take full control of his near limitless power. A handful of heroes band together to repel this invasion that infects the Negative Zone at a rapid rate before it could launch a second invasion of the main universe.

In 2021, a crossover event was announced: The Last Annihilation, which sees the newest and largest incarnation of the Guardians of the Galaxy and Krakoa's space-based defenders, S.W.O.R.D. teaming up to defend an upbraided galaxy from a mysterious new evil.