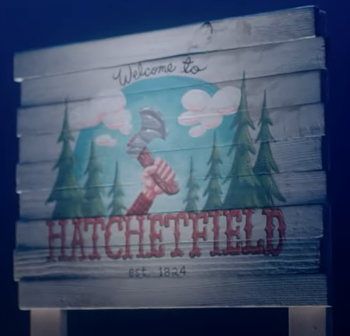 Emma: Man... my whole life, my one goal was to avoid dying in Hatchetfield. But... here we are.
Paul: Hey, could be worse. You could be dying in Clivesdale.

Hatchetfield is a Shared Universe of Horror Comedy stories created by the Lang Brothers, set in the small fictional town of Hatchetfield, Michigan, a Town with a Dark Secret haunted, in many different realities, by all sorts of paranormal, extraterrestrial, and interdimensional phenomena. Written by the Lang brothers with music by Jeff Blim, the Hatchetfield saga has been the main focus of Team StarKid ever since they moved their operation from Chicago to Los Angeles in 2018.

The saga consists of the following works:

The originally planned third installment of the series was meant to be the stage musical Nerdy Prudes Must Die, but that was put on hold due to the COVID-19 Pandemic and replaced with Nightmare Time, a series of Hatchetfield mini-stories told via Zoomcast. With the three-episode, six-story series of Nightmare Time having been revealed near the end of its run to in fact be Nightmare Time season 1, and Nick Lang having established that Nerdy Prudes Must Die is not, as many have assumed, the third installment of a trilogy, it is clear that many more Hatchetfield stories are planned for the future.

Now has a full-franchise character sheet and a timeline.

Please do not spoil material not yet available to the public! Nightmare Time 2 will be released on YouTube at a future date. Those who have obtained digital tickets, please refrain from troping them until such a time as all StarKid fans have been able to see it.