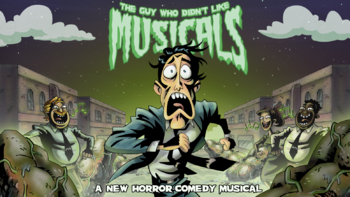 "I feel like there's something sinister infecting Hatchetfield. And I know this is gonna sound crazy, and not very scary, but it is scary, if you think about the implications: I think the world is becoming a musical."
—Paul
Advertisement:

The Guy Who Didn't Like Musicals is a horror-comedy musical from Team Starkid. The eleventh in their long-running oeuvre of live shows, and the first since Starkid's relocation from Chicago to LA. The show premiered Oct. 11, 2018 at the Matrix Theatre and ran for four weekends

Everything in Hatchetfield seemed normal until people began singing... Then, they began dancing... And now, a musical pandemic is sweeping the entire city. It's up to Paul—an average guy who doesn’t like musicals—and his friends to stop this musical apocalypse and fight for humanity's future.

The show stars Starkid newcomer Jon Matteson as Paul, along with fellow first-timer Mariah Rose Faith as Zoey, and Starkid regulars Jaime Lyn Beatty (Charlotte), Jeff Blim (Sam), Corey Dorris (Bill), Lauren Lopez (Emma), Robert Manion (Prof. Hidgens), and Joey Richter (Ted). As with all Starkid musicals thus far, the musical was written by the Lang Brothers Matt and Nick, with Nick acting as director and producer. Jeff Blim co-wrote this show and composed the music, as with The Trail to Oregon!.

A Spiritual Successor to this show, Black Friday, opened in October 2019, officially making this show the beginning of the "Hatchetfield series", with a third entry in the series, Nerdy Prudes Must Die, to come. As a Kickstarter stretch goal for Black Friday, Starkid also announced the production of a Spin-Off short film of The Guy Who Didn't Like Musicals, Workin' Boys (a Defictionalization of the Show Within a Show proposed by Breakout Character Professor Hidgens), although it's been indefinitely delayed due to the COVID-19 Pandemic.

The Guy Who Didn't Like Musicals contains the following tropes: