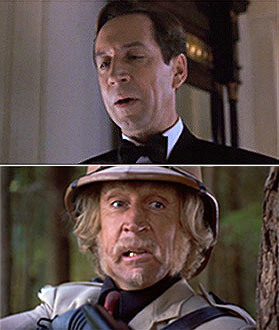 Frequently in fiction, and especially in theatre, the same actor will play multiple roles. Sometimes this will just be for the sake of convenience, and not meaningful to the plot; after all, if an actor is going to show up at the theatre every night to perform, you might as well take as much advantage of his or her skills as possible. However, sometimes there are reasons for the same actor playing two parts that are symbolic or have some subliminal impact in the story. Hence, Significant Double Casting.

Compare Identical Grandson, Identical Stranger. Often used to hint towards a Two Aliases, One Character situation when both are played by the same actor. Contrast Cast as a Mask, where two different actors are cast to conceal the fact that they're playing the same character.