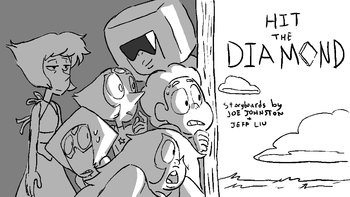 Five Rubies emerge from the Roaming Eye. Their mission is to find the Gem that their vessel's scanners spotted.

Back in the barn, Peridot thinks that Homeworld must want her shattered, since she disobeyed and insulted Yellow Diamond. The other Gems (save for Lapis) are ready to protect her.

Garnet: Don't worry Peridot, it's our sworn duty to protect anything that calls this planet home, and that includes clods like you.

Garnet has a plan, and she unfuses into Ruby and Sapphire to carry it out. Ruby infiltrates the group of Rubies to find their purpose. They do not notice their extra member and even behave like she was always there. They finally spot the barn and decide to search it, with Crystal Gem Ruby quickly volunteering.

The Crystal Gems consider their options and settle on nonviolent means. Ruby and Steven come out and tell the other Rubies that there's nothing but humans in the barn, but the Rubies are still skeptical and want to double-check. Steven, looking at the baseball bat he's holding, challenges them to a baseball game. If the Rubies win, they can search the barn, and if the "humans" win, the Rubies have to leave forever. The Rubies accept.

Advertisement:
All: Baseball?!
Sapphire: I... saw that this was a possibility, though I am surprised that this is the path we’re taking.

Steven and the disguised Crystal Gems play baseball with the six Rubies, using the half-buried Roaming Eye as the pitcher's mound. Both teams do a decent job, except Ruby and Sapphire, who are too busy flirting with each other to concentrate. Luckily, none of the Homeworld Rubies take notice.

In the final inning, Steven explains to his team that the batter, Sapphire, must get a home run in order for them to win. With a brief pep talk from Ruby, Sapphire is able to concentrate on the ball and sends it flying for a home run. In celebration, Sapphire jumps into Ruby's arms, and they accidentally fuse, blowing the Crystal Gems' disguise.

The Rubies fuse to become a much larger Ruby, and Peridot runs out of the barn to defend her friends and turn herself in. The Crystal Gems learn that Homeworld isn't interested in Peridot at all, only Jasper. The Ruby fusion demands Jasper's whereabouts, and Steven hastily claims that she's on Neptune.

After a tense silence, the fusion buys the lie without question, and the Rubies unfuse. The leader fails to notice they're a five-Gem team again, and they all leave for Neptune.

Amethyst: Man, Rubies are dumb.
Garnet: Not all of them.

Iris Out on a smiling Garnet.