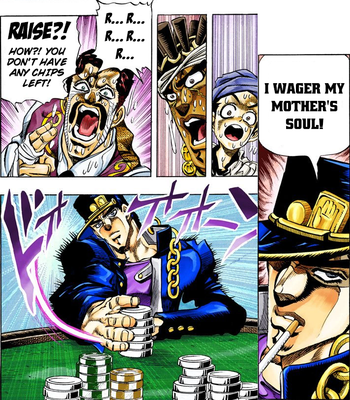 Go big or go home.
"You see, Mario, you're not just playing for the enjoyment of our studio audience and millions around the world... You're playing for your life."
— Snifit or Whifit Host, Paper Mario: Color Splash
Advertisement:

Gambling games are fun for the participants. But, as anyone who's watched Poker on television can attest, the same games that are fun to play can be painfully boring to watch, as spectators have no stake in the proceedings and do not experience the thrill of winning.

Therefore, storytellers will crank the stakes up by causing characters to bet enormous sums of money well above the table limits of a casino game. Cars, houses, family members, organs, their life, or other non-liquid assets they can't afford to lose will be wagered by a desperate, cash-starved gambler.

The item wagered is usually not appraised, with no agreement made about what reward the player should receive in the unlikely event he does, somehow, win the game. (Especially common in poker, where the rule that all "holding" players must have contributed equally to the pot is easily ignored.)

Losers will honor the bet even though there is no legal grounds compelling them to follow through. This is usually justified by setting the game in an underground gambling facility, possibly operated by an Eccentric Millionaire, where unconventional bets are accepted and violence can be used to collect on debts.

Players are rarely forced to play these games or make the absurdly high wager. They are generally given a choice of whether or not to participate, even if the alternative is another bad situation. Often, the wager is made due to overconfidence, or an attempt to escape from gambling debts.

The games are usually based on skill, not simply luck. When the player inevitably loses, they will invoke Rules Lawyer or Loophole Abuse to avoid paying out. If the game being played IS based on luck, cheating is to be expected (and perhaps even encouraged).

Deals with Devils and Chess with Death are common examples. If the game is televised, expect it to be an Immoral Reality Show. Entertainment-hungry psychopaths might invoke this trope along with Criminal Mind Games. Life-or-Death Question will usually be an element. Related to The Bet.

Roberta challenges Bitsy to a redo of the 440 yard dash they were in as high school freshman. If she wins, Bitsy will have to return the eighth-place ribbon she should've rightfully won. If she loses, she'll seriously consider selling her newspaper to Bitsy.

Roberta challenges Bitsy to a redo of the 440 yard dash they were in as high school freshman. If she wins, Bitsy will have to return the eighth-place ribbon she should've rightfully won. If she loses, she'll seriously consider selling her newspaper to Bitsy.