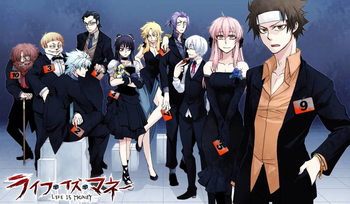 Imagine this: your little sister is dying. She needs 100 million yen for her surgery, and no matter how hard you work, you can't raise the money. A charity started, but the people who helped to raise it took everything without a word. As you sit in a bar at night, drinking to forget your worries, a mysterious man asks you if you would bet your life for money.

This is the start of Life is Money, a short psychological horror series by Asiniji Teru.

The story is about ten people who compete in "The Nightmare Game." If their anxiety exceeds a certain numerical value, they die. When a player dies, their prize money is divided among the survivors. However, it is possible for all players to survive, in which case each person will win fifty million yen.

Over the course of the game, the protagonists try to hold onto their humanity as they survive the mental prison, and learn a lot of things about the darker corners of the human mind along the way.