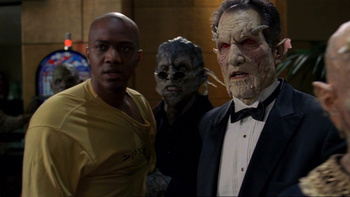 Gunn and Fred look through Wesley's files. Gunn finds them bewildering. Sometimes he can't even pronounce the client's name. One file is for a demon couple named Frzylca (frizz-ill-ka), who have a squatter in their lair. Lorne comes downstairs and joins the conversation, and the three discuss that Angel won't come out of his room, and although his rage seems to have passed, the three would rather leave him be. Suddenly Cordelia and the Groosalugg return from their vacation in Mexico bearing gifts only to be greeted by everyone's solemn faces. Cordelia knows immediately that something terrible has happened.

Cordelia goes upstairs to comfort Angel, who is brooding by Connor's empty crib.

At a casino, Jenoff, a demon in a tuxedo with a bow tie who owns the place, hands a marker to one of his enforcers. "It's time to collect his soul," says Jenoff. The marker is a business card for Angel Investigations.

Gunn and Fred interview the Frzylcas, an elderly couple married for 300 years. A Skench demon has occupied their house. Skench demons make loud noises and project streams of phlegm to drive other demons out of their lair. Gunn and Fred promise to remove the Skench demon that day.

Fred visits Wesley at the hospital and bring him some things from his office. Wesley cannot speak, but Fred tells him that while Angel was wrong to try and kill him, Angel was nonetheless right to blame him for Connor's disappearance. She tells him that they're supposed to be friends, yet he chose to go behind their backs and turn to Holtz over trusting them. She adds that Wesley is no longer welcome in the hotel and Angel will kill him if he ever returns. As she leaves, she tells him that the prophecy was false and Wesley is left with the painful truth that he sacrificed everything for nothing.

Jenoff's enforcer appears at Angel Investigations. He meets the Groosalugg, whom he mistakes for Angel.

Gunn finds the Frzylca's home in a cave leading off a sewer. He quickly kills the Skench demon, but when he rises, he sees Jennoff's enforcer.

In a flashback to seven years earlier, Gunn enters Jenoff's casino. After a frisking by Jennoff's enforcer, Gunn speaks with the man himself, who recognizes him and knows his reputation as a protector of the young and innocent. Gunn hands Jenoff a photograph of his heart's desire. Jenoff says he can "make it happen," but it will cost Gunn his future. Gunn, thinking he has no future, agrees and signs a blood oath.

At the Frzylca's lair, the Repo Man tells Gunn it's time to pay off. The casino watches the Akashic Records and know that Gunn plans to transfer his soul to Fred, which would violate his contract with Jenoff. Gunn has 24 hours to report to the casino and deliver his soul. If Gunn reneges, Jenoff will take Fred's soul as well as Gunn's.

Gunn returns to Angel Investigations, where he meets Cordelia, who advises him to take a day off and go on a date with Fred.

The next morning, Gunn brings Fred breakfast in bed. He tells her they both have the day off and he intends that they should have the best day of their lives together.

At the hospital, a doctor informs Wesley he will be released from the hospital, and asks if Wesley has someone who can pick him up. Wesley remains silent, knowing that because of his foolish actions he now has no friends left.

Angel and Cordelia reflect on the loss of Connor and what it means.

Gunn and Fred are eating at a garden restaurant. Fred says she is full. Gunn wants to fill the afternoon with movies, club, shopping, and roller rink. Fred says she's "kind of wiped." Gunn is afraid he is trying too hard. Suddenly, Fred guesses that something is wrong. She asks Gunn if he has leukemia, which makes him laugh. Now she guesses that something is wrong, and asks Gunn to tell her the truth. Gunn, knowing she won't leave the subject alone otherwise, pretends to be suddenly angry and tells her they are through and storms off.

Cordelia tells Angel that the hurt he is feeling will never go away, and he will continue to love and miss his son always, even if he lives another 200 years. Angel says he does not know how he will get through it, and she assures him that the 'how' will work itself out, and regardless of what's happened life will go on and the helpless will still need help. Just then, the two hear sobbing through the door and Cordy opens to find Fred in tears over what happened. Fred says she didn't know where else to go, but she didn't want to knock and interrupt them. Angel asks Fred what's wrong, and she explains something is wrong with Gunn.

At the casino, Jenoff, standing on a mezzanine, sticks two fingers in a man's eyes, which is how he takes a person's soul. Downstairs, Gunn appears and tells the Repo Man that he is there to pay his bill.

In the lobby of the Hyperion Hotel, Fred explains that Gunn would only hurt her if that were necessary to protect her, so he must be in danger. Cordelia and the Groosalugg are doubtful, but Angel says he intends to help Gunn and doesn't want to lose another member of the family.

Wesley returns to his apartment alone.

The AI team makes plans to find Gunn. The Groosalugg produces the business card that the Repo Man left with him. Angel knows Jenoff, whom he calls "the soul sucker."

At the casino, Jenoff's latest victim is hauled away. The Repo Man brings Gunn to Jenoff. As Jenoff is about to insert his fingers in Gunn's eyes, the AI team bursts in. They are soon surrounded both by casino customers and Jenoff's henchmen, all hostile. Jenoff orders his henchmen to kill them. Angel interrupts the slaughter by offering Jenoff a double or nothing bet in which Jenoff might win Angel's soul as well as Gunn's.

Fred is unhappy with the wager. Angel promises he will not lose, then hands Cordelia a stake, telling her she knows what to do with it if he loses. At the card table, Angel proposes a simple cut of the deck, high card winning. Jenoff pulls the nine of clubs. Angel pulls the three of hearts. Cordelia then stakes Jennoff's hand to the table, and Angel chops off his head with an axe. Jenoff immediately sprouts a new head. Angel shouts, "Anybody else here owe this guy?" which causes the whole crowd to attack Jenoff. In the melee, the AI team escapes.