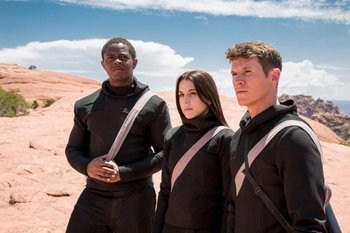 From left to right: Abram, Feena and Ezra
Extinct is a post-apocalyptic science-fiction television series written by Orson Scott Card and Aaron Johnston, who previously collaborated on Formic Wars, the prequel trilogy to Ender's Game. It is BYUtv's second scripted series (after Granite Flats). It was picked up for 10 episodes, eight of which were released on 1 October 2017. The last two episodes were released on 19 November 2017. On 5 January 2018, BYUtv announced that they would not renew the series. The series was available for free on BYUtv's web site

, but as BYUtv no longer has the rights to the show, the episodes have been removed.
Advertisement:

In the near future, an alien race called the Karik invade Earth and annihilate the human race. Four hundred years later, humans are recreated by creatures called the Sparks to aid in reviving the species. However, the Reborns are opposed by the Skin Riders, parasitic creatures that infect and control Reborn hosts.