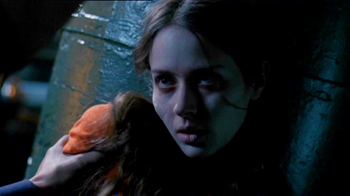 Fred plans to repaint the room once occupied by Connor. The Groosalugg suggests a change of color. Angel insists that everything in the room will remain the same. Cordelia adds that the cracks in the wall will stay unless they hire a contractor.

Angel examines a snow-globe that he once bought for Connor. He doesn't know why he bought it. He looks up and suggests that everyone go back to work. Gunn says there is no work. Fred says there are no active cases, and the last call was more than a week ago.

Downstairs, an actual walk-in customer enters the building. He finds no one, and is about to leave, saying "they probably couldn't find my dog anyway," when he is jumped by a translucent, slug-like creature that crawls into his mouth. Angel comes downstairs and introduces himself to the customer, who turns away saying, "we have to go."

Cordelia comes downstairs and asks Angel about the pentagram. She reminds him that dark magic will entail a "cosmic price" and unintended consequences. Angel admits he might not have been thinking clearly when he did the spell.

Cordelia is unhappy that Angel did not call her back from her vacation to help when Wesley took Connor. Angel promises to call her "next time" and asks her to find another case for him to work on.

At a juice bar, the same man who walked into Angel Investigations now drinks two peach smoothies at once. He has been there for six hours and has consumed at least 100 of them. The manager asks him to leave. He shoves the manager aside and demands more water.

At Wolfram & Hart, Lilah and Gavin have a tense conversation about whether Lilah is making progress in bringing Angel over to the dark side.

Angel, once again CEO of Angel Investigations, is sitting at his old desk where Wesley was sitting a few days before. Fred and Gunn discuss the situation. Gunn says they should never mention Wesley's name again. We see a brief closeup of the snow globe Angel once bought for Connor.

Cordelia and the Groosalugg try to remove the pentagram from the Hyperion Hotel lobby. Cordelia gives up and suggests buying a throw rug to cover it up. While the Groosalugg empties their bucket, Fred tries to persuade Cordelia to intervene with Angel on Wesley's behalf, but Cordelia replies that she will not and cannot, only caring about Angel's feelings on the subject. The Groosalugg overhears her speak of all the things she has done for Angel, including becoming part demon. She mentions that parenthetically that it is now sometimes unclear to her whether something she sees or hears is or is not part of a vision. At that moment, she sees Angel thrown across the floor to the base of the stairs, then, an instant later, sees him standing behind his desk.

Lorne enters. He describes what is happening at the juice bar. The AI team enters. Angel recognizes the walk-in customer from earlier that day. Fred finds his wallet with his driver's license, and identifies him as Phillip Spivey. Angel knocks him out. He smiles for the first time since Wesley took Connor, happy to have a case.

The Groosalugg carries Spivey back to Angel Investigations. While Fred goes for water, Angel remembers that Spivey used the word "we" instead of "I," as when he complained that "we" were thirsty.

While Cordelia tries to tell Angel about her most recent vision, Spivey wakes up, points his finger at Angel, and says, "This is all your fault!" He falls forward and breaks into powder. Lorne notices the transparent lobster creature escaping from Spivey's neck. The AI team retreats to avoid it.

Angel details Fred to research the monster. He suggests she look into thaumogenesis, the creation of a demon as a byproduct of dark magic. Gunn stays with Fred. The rest pick up weapons and hunt for the monster.

Upstairs, Angel and Lorne find a slug drinking from a toilet. Angel spears it with a sword, but it slips off and runs away.

Downstairs, Fred complains to Gunn that she is having little success researching thaumogenesis. She doubts she will ever be as good as "some people," meaning Wesley. They fail to notice when a portal opens momentarily in the lobby and two slugs drop out.

At Wolfram & Hart, Lilah receives a confidential email describing the situation at Angel Investigations as a "bio-plasmic infection." The email says the exact nature of the infection is not known, but it seems to involve thaumogenesis.

Gavin Park enters Lilah's office. He has received the same email. He notes that Linwood is not around to handle the crisis, and says Lilah will be in big trouble if Angel dies and the Senior Partners find out his death was caused by a spell Lilah helped him cast.

Upstairs at the Hyperion Hotel, Cordelia and the Groosalugg are hunting slugs. The Groosalugg reminds Cordelia of what she said about Angel's feelings being her only priority. Cordelia tries to explain what she meant, but she is interrupted by the appearance of another slug.

The AI team assembles in the lobby. Angel hands out flashlights. His plan is to shut off all the lights, which will make the slugs, which glow in the dark, easier to find and kill.

Angel and Gunn go downstairs to shut off the power.

Upstairs, Fred is still doing research. A slug is hanging on the wall behind her. It leaps at her and dives into her mouth.

Angel, Lorne, Cordelia and the Groosalugg are in the south wing hunting for slugs. They find a double door that is chained shut. A sound like the chirping of birds is coming from behind it. Angel kicks it open.

Gunn joins Fred at her desk. Fred says she is scared and Gunn tries to reassure her. Fred tells Gunn he should get out of there, but Gunn misunderstands her. She breaks the glass on the snowglobe and drinks the water inside, saying "we're thirsty."

Upstairs, Angel and the other three find a ballroom behind the door that Angel kicked open. Gunn appears supporting Fred. Gunn wants to take Fred to a hospital. Fred says that going to a hospital is just what the slug wants, but Gunn insists on taking her anyway. The Groosalugg determines that the sounds are coming from underneath the floor, so he and Angel chop up the floor with axes. They find a swimming pool full of slugs. Some of the slugs escape through the floor and the AI team runs.

They escape into a large kitchen. When Fred, with the slug inside her body, complains of the heat, Angel has an idea. He turns on all the stoves and ovens to make the kitchen so hot and dry that the slugs will not want in. Fred suddenly asks where Gunn is. He is not in the kitchen.

At Wolfram & Hart, Lilah assembled an operations team to clean out the Hyperion Hotel before Linwood returns. Gavin Park enters and says she is "a little late." Lilah dismisses the operations team and questions Gavin, who says he has spoken with Linwood on a special cell phone. Linwood wants to "let them all die" and threatens to take the cost out of Lilah's salary if she orders a special operation to rescue Angel Investigations.

Gunn knocks on Wesley's door and asks for help.

In the kitchen, Angel pins Fred against the wall and interrogates the slug inside her. The slug says it wants to live and is running from something it calls "the Destroyer." It says the Destroyer is not after it, but after Angel.

Gunn, who is clearly harbouring a great deal of anger and resentment towards his former friend, explains the problem to Wesley. Wesley says he cannot help, and explains that the only reason he lived after his throat was cut was to tell his friends his side of the story, however Gunn isn't interested in Wesley's side. When he hears that Fred is the one in most immediate danger, Wes tosses a bottle of vodka to Gunn and agrees to help, but warns Gunn that neither he nor any other person at Angel Investigations must ever come to him again.

When Fred's skin begins to crack and Angel fears she may be near death, he orders the stoves and ovens turned off and tells Lorne and the Groosalugg to take her to a hospital. He turns on all the water faucets in the kitchen to distract the slugs.

As Lorne and the Groosalugg are about to leave the hotel with Fred, Gunn enters and tells them to put Fred down. He gives her a drink of vodka, which causes the slug to burst out of her body through her mouth. The Groosalugg kills it.

In the kitchen, Cordelia and Angel fight the slugs. Several slugs land on Cordelia's arm. She seems to turn into a creature of light. The glow from her body fills the hotel, and all the slugs are dead, killed by her demon power.

In the lobby, Gunn explains that he did what he had to do to save Fred (although he doesn't mention that he went to Wesley) reconciles with Angel. Lorne reminds the team that the Destroyer mentioned by the slugs is still not arrived. Fred says the Destroyer is coming right at that moment, just as the portal starts to crackle. The gang prepare themselves for a fight, as a large monstrous demon emerges ready for a fight... when immediately afterward, a second portal opens and a young man emerges who easily kills the demon with one blow. The boy then aims a weapon at Angel and says "Hi, Dad", revealing himself to actually be Connor.