"Everything here is hard, and bright, and violent. Everything I feel, everything I touch ... this is Hell."
—Buffy Summers 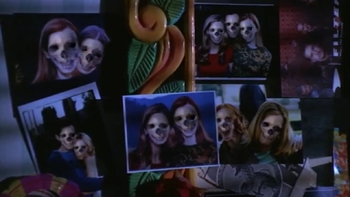 The Scoobies rush to find Buffy and figure she must be back at her house. The bikers are on the run now that their leader, Razor has been killed. At the house, Buffy is confused and is acting odd. Dawn tells her that Giles has left Sunnydale. When Dawn and Buffy walk downstairs, Spike speaks to Dawn, thinking Buffy is the newly repaired Buffybot. When Spike gets a clear look at Buffy, he realises immediately that she's back. He softens and helps clean up her wounded hands. They talk about how long she's been gone; 147 days. Spike counted every one of them. When the Scoobies arrive and focus on the Slayer, Spike slips away.

Unable to stand all the concerned attention, Buffy goes upstairs whilst Anya and Xander leave for food. Outside, they find Spike who's mad at them for not telling him about their plans to resurrect Buffy despite him helping them all summer. He realises that his love for Buffy would have been an obstacle if she had returned as something they'd have to destroy. He warns Xander of the consequences of their actions as magic always has them.

After telling Giles of Buffy's return, Willow and Tara go to bed and talk about the spell and the changes in Buffy.In her room, Buffy looks at photographs surrounding her and sees the faces briefly turn into skulls.During the night, Willow and Tara are visited by Buffy who hints at Willow killing the deer for the resurrection spell. When the girls get up to investigate further, they find Buffy asleep in her room and neither know the source of the incident. A moving lump appears in the ceiling, motivating Willow to call Xander. In the background while Xander talks, Anya enters the room with a knife and white eyes. She starts laughing maniacally and slitting her cheeks with the blade before collapsing. The lump then travels across the floor.

The gang get together the next day to brainstorm but none of them know what the thing could be and Buffy is still very closed off from them. At the Magic Box, Buffy still feels out of place and goes out to patrol alone. With Buffy gone, the demon possesses Dawn who shouts at them and breathes fire before passing out. Buffy finds Spike at his crypt where the two talk awkwardly at first. Spike opens up about his guilt over not being able to save her or Dawn. He explains that every night, he had thought of a better way to save her and wished he could have done it for real.

Led on by Spike's hint that Willow's spell was more dangerous than she let on, Xander questions whether the witches knew of such dangers but is quickly quietened. Willow reveals that the creature was made by the spell that brought Buffy back. The demon currently doesn't have a body so it has been possessing members of the Scoobies. A reversal of the spell will kill the demon but would reverse Buffy's resurrection spell too.After Dawn freaks out at the concept of losing Buffy again, Willow discovers that the demon can only survive if Buffy is killed. The demon, which had hold of Xander's body when Willow revealed this information, thanks Willow and leaves to find the Slayer.

Buffy is attacked by the formless demon which she can't hurt but it can hurt her. Willow and Tara cast a spell to make the demon solid and Buffy kills it with an axe.

Normality is somewhat resumed as Dawn heads off to school and Buffy waves. Buffy visits her friends at the Magic Box and tells them she was in Hell and appreciates them bringing her back.

Buffy goes outside into the alley behind the shop, where she finds Spike in a patch of shade. He tries to talk to her and offer her help. She admits to him that she wasn't initially sure but she knows she wasn't in Hell. Buffy had gone to Heaven and her friends had pulled her out. She tells Spike that this reality is Hell but stresses that her friends must never know. The credits roll as she walks away, leaving a horror-stricken Spike alone in the alley.