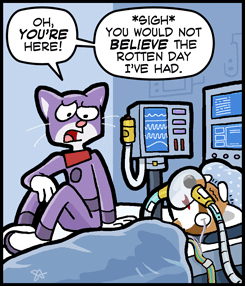 "When Rick told me he was having trouble with his wife, I had to laugh. Not because of what he said, but because of a joke I thought of. I told him the joke, but he didn't laugh very much. Some friend he is."
— Jack Handey
Advertisement:

Common sense dictates that it never pays to judge someone too quickly, jump to conclusions, or condemn someone without hearing the whole story. In the world of fiction, however, many characters are not only guilty of all of the above, but feel no remorse for it whatsoever, even when it results in serious emotional damage.

For example, here's a quick quiz: It's your birthday, and you have told your boyfriend/girlfriend/other loved one exactly what you would like as a present to mark the occasion. You walk into the living room and find your gift... which has been broken/ripped into a million little pieces, although someone has clearly been making a valiant effort to repair it. Moreover, it's the wrong color. As you're staring at it, your Loved One stumbles in from the kitchen. They have their arm in a sling, their jeans have been ripped by something that clearly has sharp teeth, and they don't seem to have noticed that their hair is on fire. Seeing you, they offer a lopsided smile, and a tired if hopeful "Happy birthday."

Most of us of (relatively) sound mind would choose (a) — the softer hearted (or fireproof) among us might choose (b). For some reason, though, an awful lot of characters in fiction prefer (c), throwing a tantrum or launching into a lecture when there really weren't any grounds for one.

It's as if they've suffered a complete case of empathy failure. Anyone can tell that The Hero has had a hard time. They've got the scars to prove it. At the very least, any onlooker's sense of curiosity should wake up for long enough to ask "Why is there a piranha attached to your thigh?" Moreover, basic human decency would dictate that we cut them some slack when they're clearly in pain, at least for long enough to figure out the whole story.

More bewildering is when the friend/onlooker knows exactly what the hero's been through, because they were there too. They know that Diabolus ex Machina has been rather busy in the hero's social circle, and that his buddy Deus Angst Machina covered a couple of Diabolus' shifts for him when he had the cold. Yet still they show absolutely no mercy, demanding that the hero "pull himself together" or "get over it!" So much for friendship.

A variant of this trope is a character type who is blind to the suffering of others. Not in the active, thoughtlessly cruel way of Comedic Sociopathy, but just completely unable to appreciate the pain or distress of other people. If anyone "fails" them, there will be hell to pay, no matter how much effort went into fulfilling their orders. Generally, this is a personality trait of more cynical characters, such as The Stoic. Some Tsundere types sport it as well, although in this case they'll probably be called on it. In both cases, the writer usually makes it clear that the "problem" is on the side of the character with no sympathy, not on the side of whoever is unfortunate enough to cross them.

This is an odd trope; although often seen in comedies, it's not always comedic as far as the audience is concerned, and can be a real sucker punch if the protagonist undergoes tremendous hardship only to have his friends berate him.

A Kafka Komedy often invokes this trope. Comedic Sociopathy is its demented sibling. Sometimes No Sympathy can be justified if the characters are young, since younger people are expected to be more self-centered and less empathic than adults... although, having said that, this may be extremely unfair to young people. It might also be justified if the recipient is the Asshole Victim since, let's face it, it's kind of hard to sympathize with them to begin with.

Compare Ungrateful Bastard. If a character is deliberately stated to be incapable of sympathizing with the feelings or viewpoints of others, that's Lack of Empathy. For when nobody seems to find women enacting random violence towards men for non-existent reasons at all unusual see Unprovoked Pervert Payback. "Rashomon"-Style shows frequently have contrasting examples of this: someone who got hurt will usually report callousness and lack of sympathy from the other characters, while each one describes him or herself as the one who acted most effectively and compassionately to the injury. For a fitting Stock Phrase regarding this trope, it's Quit Your Whining. For the audience version, see Angst Dissonance. If this sort of attitude is aimed at characters who hold a grievance, then it's No Sympathy for Grudgeholders. For characters rejecting sympathy instead of being given the lack of it, it's Don't You Dare Pity Me!.

A character who displays this trope can be and often is turned into The Scrappy, as audiences hate them for being nasty and spiteful pricks to people who've usually suffered enough to become The Woobie - assuming they aren't intended to be a Hate Sink to begin with. This is the central conceit of the Unsympathetic Comedy Protagonist - the audience enjoys seeing them suffer because they usually deserve it. See also Jerkass Ball, Conflict Ball, Distress Ball and Idiot Ball (which are main and/or only reasons why the person unsympathethic while usually they do).

Examples of plot-related No Sympathy

Examples of No Sympathy as a character trait:

"Give Me Back My Floor!"

Somehow, Moe ends up getting the floor of his bar repossessed. When the Repo man tells him to pay his bill to get it back, Moe flat out states he doesn't want to.

"Give Me Back My Floor!"

Somehow, Moe ends up getting the floor of his bar repossessed. When the Repo man tells him to pay his bill to get it back, Moe flat out states he doesn't want to.