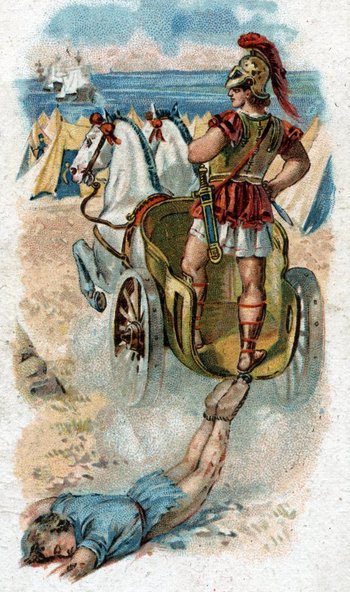 "Thrice did [Achilles] drag [Hektor's body] round the tomb of the son of Menoitios, and then went back into his tent, leaving the body on the ground full length and with its face downwards."
"I have a thousand ideas about how to defile your remains. Want to hear my favorites?"
— Brunt, Star Trek: Deep Space Nine, "Body Parts"
Advertisement:

Usually when someone dies in fiction their body is ignored. If they're important (or just important to the plot), you may see them being buried or inspected at a local morgue, but due to the Law of Conservation of Detail they are usually quickly forgotten. Sometimes, though, the deceased gets a lot more attention.

Sometimes a character has a pragmatic reason to kill a dead person again, or is too emotional to stop themselves even though their victim is long past resistance. In this case, however, a character makes a deliberate decision to humiliate or punish the dead person even further. Sometimes they're so angry that death just isn't enough, sometimes they need a Dead Guy on Display to show the public that an enemy is truly, thoroughly defeated, and sometimes they're so evil they want to play with them some more. Spite, revenge, intimidation, and depravity are common motivators for desecrating the dead - for both Heroes and Villains.

It isn't always the physical corpse that's being desecrated; the spirit of the victim can be targeted for further abuse, a grave or monument can be defaced, or the works of the person can be destroyed even if they could be utilized for the betterment of society because it's more important to erase the creator.

The message sent is often dependent on what kind of character does the desecration:

Compare this to Kick Them While They're Down (where the victim is usually still alive), Of Corpse He's Alive (where the corpse is used as a puppet to maintain a pretense that the deceased is alive), and There's No Kill Like Overkill (in which the death itself is the abuse).

May overlap with What the Hell, Hero? (if the good guys do this and are called out on it), Creepy Souvenir (when a part of the corpse is kept as a trophy), Dead Guy on Display (when the corpse is displayed publicly, whether mistreated or not), or Last Disrespects (when the abuse happens at the funeral). Eating bits of someone's corpse is a particularly nasty way to desecrate their body: in places which don't have laws specifically forbidding cannibalism, cannibals are tried under desecration of a body. An extremely mild version of corpse abuse might be the Spiteful Spit. Human Resources is when someone extracts something useful from a body - which can overlap with this trope.

Supertrope to Pummeling the Corpse (when a person can't stop beating someone they've already killed because of an emotional breakdown) and Make Sure He's Dead (which is the justified version, and which may overlap with Rasputinian Death in cases where the dead has to be desecrated to keep them that way). Compare Dead Guy Puppet.

Robbing the Dead is almost never considered this in fiction, although it is in Real Life. The Hero has to loot the bodies and the crypts, after all.

As a Death Trope, spoilers may be unmarked. You have been warned.

When a Protagonist Desecrates the Dead:

When an Antagonist Desecrates the Dead:

When Other Characters Desecrate the Dead:

Brian and Peter pee on graves

Brian and Stewie pee on graves of the inventors of two things they respectively hate, vacuum cleaners and vegetables.

Brian and Peter pee on graves

Brian and Stewie pee on graves of the inventors of two things they respectively hate, vacuum cleaners and vegetables.