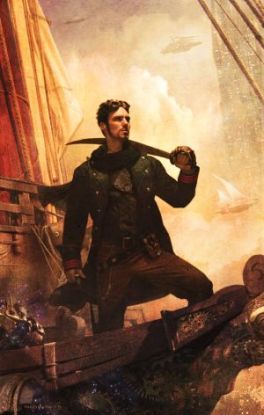 The Cinder Spires is a Steampunk series written by Jim Butcher.
Advertisement:

For two thousand years, humanity has lived within the spires, massive nigh-indestructible fortifications rising over the mist-choked lands of the surface. The spires use great fleets of airships to trade between them and keep the peace, while the surface itself is a dangerous but valuable land, filled with all manner of monsters and treasures.

Captain Grimm, Gwen Lancaster and Bridget Tagwynn are three citizens of Spire Albion who are drafted to the forefront of the war with Spire Aurora when they are caught in (and help foil) Aurora's initial surprise attack on Albion. Grimm is a disgraced former officer from Spire Albion's Fleet who commands the Predator, a privateer vessel that he uses against Albion's enemies, while Gwen Lancaster is the daughter of the Prime Minister and the heir to the largest Crystal Vattery in Albion, and Bridget is the last scion of a noble house that no longer has either fortune or political power. As recent recruits of the Spirearch's Guard, Gwen and Bridget are assigned to the company of a powerful — yet mad — etherialist and all embark aboard the Predator to discover the true target of Aurora's machinations.

The first novel, titled The Aeronaut's Windlass, was released on September 29th, 2015. The second novel will be titled The Olympian Affair.

The Cinder Spires contains examples of: