The Sky Is an Ocean 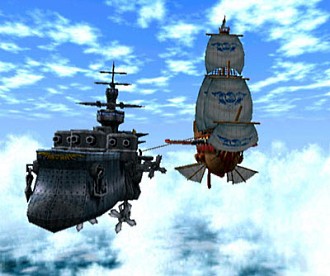 Sister Trope of Space Is an Ocean. In this case, it's the sky in the atmosphere of a planet or natural satellite being used to make visual/stylistic parallels to the ocean, but the same basic principles apply. As with space, the metaphor can easily be taken a little too far (although the presence of gravity might explain parts of it). Often runs on the Rule of Cool.

For more info on the Real Life lumbering battleships and luxury liners that ply the skies, see our Useful Notes on military aircraft and airships. Contrast Water Is Air, Sand Is Water.

Just pray you don't Walk the Plank. It's a long drop.

Alternative Title(s): Air Is An Ocean