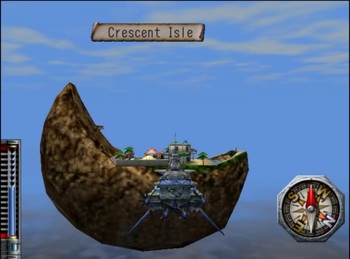 ...Hm. Darn, there's just no way of knowing why it's named that.
Advertisement:

Want to quickly convey to the viewer that an island—often a deserted or seemingly unimportant one—is somehow special? Give it the shape of a crescent moon.

The ocean tides are connected to the phases of the moon, so making an island moon-shaped ties in with this theme. Alternatively, it may simply be an aesthetic choice, being a form that is instantly recognizable while also being a plausible natural shape for an island. Either way, it's a sign that something about the island is special—maybe something will happen here when the moon in the sky is also in a crescent shape, or maybe some kind of secret—perhaps treasure—is to be found underwater in the spot right in the middle of the crescent moon.

Note that while this trope usually applies to islands, it can also include other crescent moon-shaped landforms such as lakes or valleys.

See also "Far Side" Island for another common island design. For landforms that resemble something more lively than the moon, see Monster-Shaped Mountain.