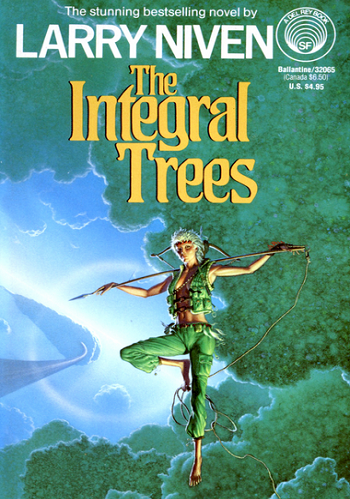 The Integral Trees (1984) is a science fiction novel by Larry Niven.
Advertisement:

It is set in the solar system of a neutron star called Voy, where gravitational forces have drawn off the atmosphere of Voy's nearest planet into an enormous gas torus orbiting the star directly. This torus, the "Smoke Ring", is the only habitable part of the system, and is home to various native life forms, including fish that swim in free-floating pools of water, and the enormous, kilometers-long Integral Trees. Several centuries before the time of the story, an Earth colony came to the system, and its descendants now live in small tribes among the branches of the Trees.

The story follows a small group from Quinn Tribe who are sent up the trunk of their Tree in an expedition and become the only survivors when a disaster destroys their tribe's home. While searching for a new home, they visit other parts of the Smoke Ring and make discoveries about the history of the people who live there.