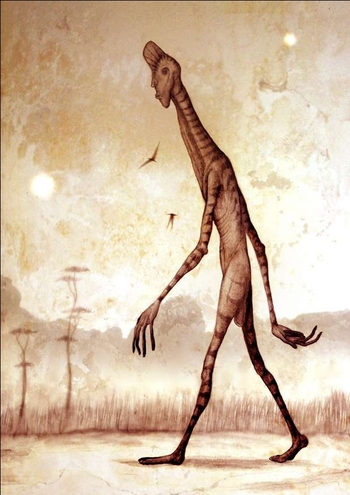 How's the weather up there?
"I'm sorry the gravity of a real planet hurts. But it's appropriate. You wish to hurt Earth, the Earth that is now crushing your weak Belter lungs and your fragile Belter bones."
— Chrisjen Avasarala, The Expanse ("Dulcinea")
Advertisement:

Lightworlders are skinny, delicate people from low-gravity habitats, or orbital colonies without artificial gravity (see Space People). They aren't nearly as common as their opposite, the Heavyworlders, since such delicate creatures are unlikely to be Big Damn Heroes. Like their heavy-gravity counterparts, though, they may be either human or alien. Low-gravity characters are often female, fragility being more forgivable in women to many writers.

Ordinary humans who visit low-gravity planets, and seem much stronger there than on Earth becoming Heavyworlders in comparison, are a Humanity Is Superior variant dating back at least to the 1912 novel A Princess of Mars. While this variant is common in vintage scifi, the natives of such worlds are seldom portrayed as skinny, fragile versions of this trope. That's probably because it makes for poor fanservice if the Distressed Damsel rescued by the "incredibly strong" human hero makes Olive Oyl look like Pamela Anderson.

In real life, astronauts who spend significant time in low-gravity situations rapidly suffer health problems, especially muscular and bone degeneration, such that men and women who were healthy upon liftoff may have trouble standing up under their own strength when they get home. This is the reason why becoming an astronaut has such strict physical fitness requirements. Astronauts working without artificial gravity have to strenuously work out and alter their diets to reduce the effects of this; there's a reason why the International Space Station has a treadmill

For the opposite, see Heavyworlder.