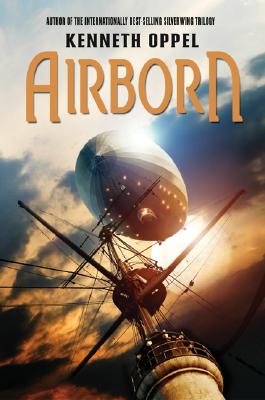 Airborn is the first book in the trilogy of the same name, written by Canadian Kenneth Oppel. The plot centers around 15-year-old cabin boy Matt Cruse, who works aboard the airship Aurora in a Steampunk Alternate History close to our world in The Edwardian Era. One night on duty in the crow's nest, Matt spots and rescues a drifting hot-air balloon with one passenger: a mysterious old man mumbling about "beautiful creatures" who dies shortly afterward. One year later, the wealthy Kate de Vries and her chaperone board the ship, Kate determined to prove the old man (her grandfather) right. The Aurora is soon scuttled on a tropical island by air pirates, and Kate and Matt discover that the creatures do in fact exist. In the two later books, Skybreaker and Starclimber, they go on to explore other extreme environments and make important scientific discoveries.

As the series goes on, Matt and Kate strike up a romance, which has to be kept hidden as they belong to different social classes. Much drama and reflection is drawn from his bitterness over having to provide for his family and her naivete to what the life of the working-class is really like. There are many other real-world issues and concepts dwelled on, such as the space race, early feminism and suffragettes, and clean energy sources.

Other supporting characters include Marjorie Simpkins, Kate's fumbling chaperone; Vikram Spirzglas, notorious Sky Pirate; Captain Walken, captain of the Aurora; Nadira, the mysterious gypsy; and Hal Slater, Bruce Lunardi, and James Sanderson, all Matt's rivals for Kate's affections at one time or another.

In-universe, airships are a completely viable mode of transportation because of a fictional gas called "hydrium" which is even lighter than helium and makes it next-to-no-effort to stay aloft, in addition to fixed-wing aircraft having never become viable as means of transportation. Vancouver, known as "Lionsgate City," is known as the airship capital of the world.

Not related to the rock band Airbourne.