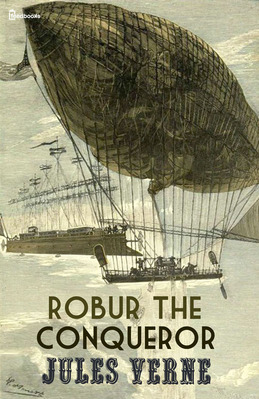 Robur the Conqueror (Robur-le-Conquérant in the original French), also known as The Clipper of the Clouds or A Trip Round the World in a Flying Machine, is a pioneering early science fiction novel by Jules Verne.
Advertisement:

In a World… where repeating sightings of an unidentified flying object are confusing the heck out of everybody, the balloon enthusiasts at the Weldon Institute are more concerned about finishing their Cool Airship. Just as their plans are reaching fever pitch, two of their top bigwigs are kidnapped by the mysterious Robur, who takes them around the world on his outrageously sophisticated flying machine Albatross,note Yep, you guessed it, the Albatross was the UFO that had caused all the commotion. just to prove that heavier-than-air travel is the way of the future and that lighter-than-air, balloon-style airships will never catch on. Adventure, intrigue, and (in classic Verne style) gobs and gobs of lovingly detailed scientific and geographic exposition all ensue.

Like most of Verne's work, Robur the Conqueror is now in the public domain. Copies of the book are hosted by Project Gutenberg, including the original French text

and an English translation

. (Warning: like many public-domain Verne translations, the old English translations of Robur take considerable liberties with the story, and make numerous errors. A university press finally published an accurate translation

Followed by a sequel, Master of the World, and made into a movie, although in the movie, the Albatross is turned into a Cool Airship, not a Cool Plane.

Robur the Conqueror displays these tropes: