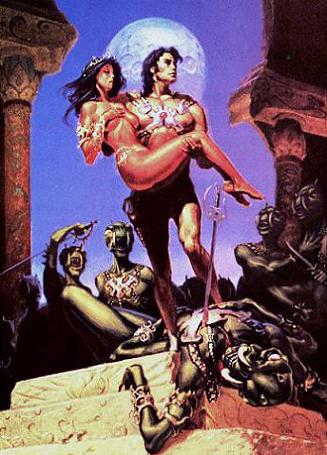 John Carter, Dejah Thoris and a number of Green Martians.
If I sometimes seem to take too great pride in my fighting ability, it must be remembered that fighting is my vocation. If your vocation be shoeing horses, or painting pictures, and you can do one or the other better than your fellows, then you are a fool if you are not proud of your ability. And so I am very proud that upon two planets no greater fighter has ever lived than John Carter, Prince of Helium.
— from The Warlord of Mars
Advertisement:

An influential series of Planetary Romance novels, written by Edgar Rice Burroughs (also the creator of the Venus-set Amtor series, the Pellucidar series, and of course Tarzan) between 1912 and 1948, with the final book in the series (a collection of shorter stories) being published posthumously in 1964.

In the first novel, A Princess of Mars, John Carter of Virginia somehow mentally projects himself to the dying planet Mars, known to its various native races as "Barsoom", where he has death-defying adventures, romances the eponymous princess, and saves the world. The novel was a hit, and a series of ten sequels followed over the course of the next few decades, initially chronicling the further adventures of John Carter before shifting their focus to other Martian characters.

The complete series is composed of the following novels, the first few of which are Public Domain in the US due to their age (anything published in 1926 or earlier). All of Burroughs' works are PD almost everywhere else in the world. Since most countries now have a term of "life plus 70"—i.e., the author's lifespan, plus 70 years—and Burroughs died in 1950, his works entered the PD in Australia, Canada, the EU, New Zealand, and the UK no later than 2021.note Because Australia, and Canada used to use "life plus 50", and NZ still does, Burroughs' works entered the PD there in 2001. While Australia and Canada have since adopted "life plus 70", Australia didn't make its change retroactive, and those works would now be PD in Canada anyway. The US didn't switch to "life plus 70" until 1978. That said, the trademark is another story entirely.

Attempts to make The Film of the Book began as early as the 1930s, when Bob Clampett got so far as to produce test footage for an animated adaptation, but it was not until the next century that a film made it all the way to release. An Mockbuster adaptation of A Princess of Mars was made by The Asylum in 2009. The film it was made to borrow the publicity from, a Disney-financed film adaptation directed by Andrew Stanton and starring Taylor Kitsch as John Carter, spent several more years in Development Hell before finally coming out in March 2012 under the title John Carter.

John Carter also has been adapted into comic book format and published by companies like Marvel. The most prominent and recent adaptation is Dynamite's Warlord of Mars, which features several spin-offs and original stories exclusive to Dynamite, as well as crossovers with other properties like Gullivar of Mars and Tarzan. There were also Czech comic adaptations of some of the first books done in the 60s and 70s, apparently the only ones to ever follow the original storyline all the way to Thuvia, Maid of Mars.

Alternative Title(s): Barsoom, A Princess Of Mars, John Carter, The Gods Of Mars