This is trope page specific to characters from John Carter of Mars. See here for the character sheet to the Warlord of Mars and here to the 2012 movie 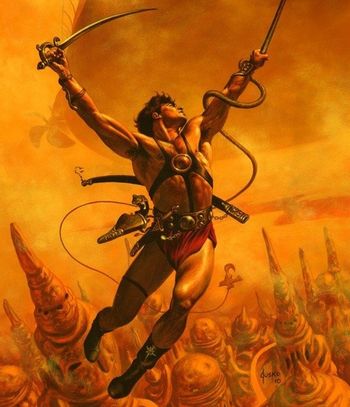 Confederate veteran of the American Civil War, he finds himself transported to Mars through mysterious ways involving astral projecton. Due to the planet's atmosphere and gravity, he is much stronger there than he is on Earth. There, he encounters both formidable alien creatures and various warring Martian races, wins the hand of Martian princess Dejah Thoris, and rises to the position of Warlord of Mars. 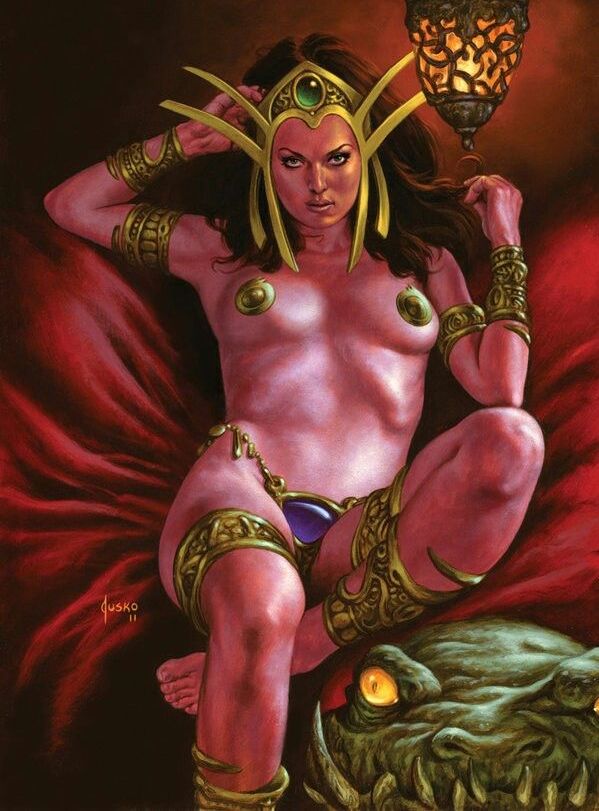 Princess of Helium and John Carter's Love Interest. She is repeatedly captured through out the books.
Red Martians
The Red Martians are the most predominant people in Barsoom, originated from the interbreeding between White, Black and Yellow Martians. They are organized into a system of imperial city-states such as Helium, Zodanga, Ptarth and many others. They resemble humans very closely, except for their red-copper skintone and laying eggs instead of giving birth.

Tropes related to the Red People:

Son of John and Dejah. He was born the very day his father disappeared from Barsoom.

A young princess of Ptarth that was captured 15 years ago by the White Martians and made their slave. She is freed by Carter when he returns to Barsoom and develops an infatuation to the Earthman. She is the female lead of Thuvia, Maid of Mars.

Daughter of John and Dejah and younger sister of Carthoris.

A Jedwar (Captain) in Helium's army.

The main protagonist in A Fighting Man of Mars, Hadron is a officer in Helium's army who embarks in the search of his beloved Sanoma Tora. 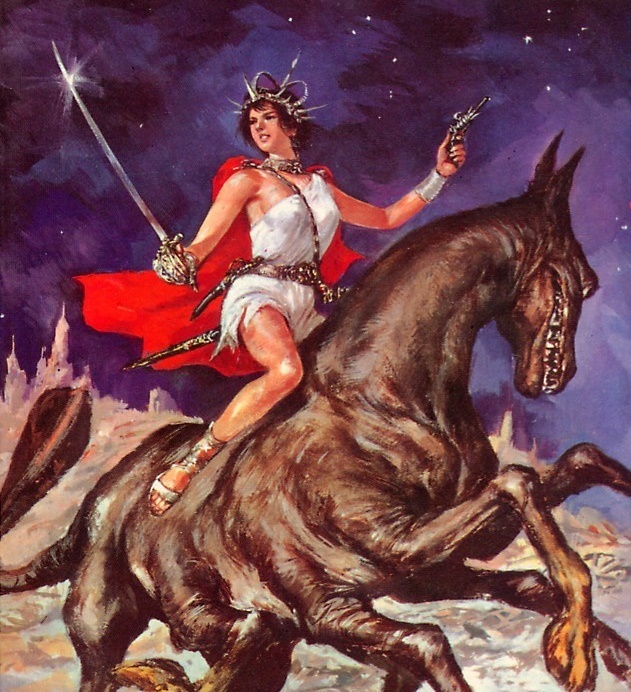 Bent on conquering the world, Tul Axatar caused several advanced war products to be developed which would make victory guaranteed; disentegrating rays,disintegration-proofing, cloaking devices. He also deliberately overpopulated his land so that he could Zerg Rush enemies with immense armies - who cares if they starve between wars? He also had a harem of thousands of women kidnapped around Mars, with Sanoma Tora as the newest addition.

Originally from Jahar, this ancient scientist fled Tul Axtar's oppressive influence and relocated at an old castle he named Jhama. He is the creator of the disentegrator ray (and its countermeasure), a paint to render objects invisible, and "the flying death," a smart bomb.

Green Martians
The other most predominant race in Barsoom, the Green Martians are a nomadic, primitive race of green-skinned humanoids with two pair of arms. They are extremely warlike and brutal, pretty much being orcs, as they frequently raid Red Martians and are the most common foes battled by the main heroes, with the exception of the Tharks, who become allied to them from the end of first book on.

Tropes related to the Green People

A Thark warrior who is the first being to befriend John Carter when he first sojourns on Mars. He is Carter's most valuable ally and his blood brother, having become Jeddak of the Tharks with his help.

Jeddak of the Tharks in A Princess of Mars.

A very cruel and bitter Green Martian crone charged with looking over the Tharks' prisoners.
White Martians
The White Martians are the Precursors in Barsoom's history. Its said they ruled Mars over 500.000 years ago as a seafaring culture, but their empire degenerated over the years after the oceans started to dry up. White Martians resemble Caucasian humans with blonde hair though some of their descendants are either auburn-haired or bald. Their people still live to this day as reclusive beings split into three races:

Matai Shang, "The Father of Therns" 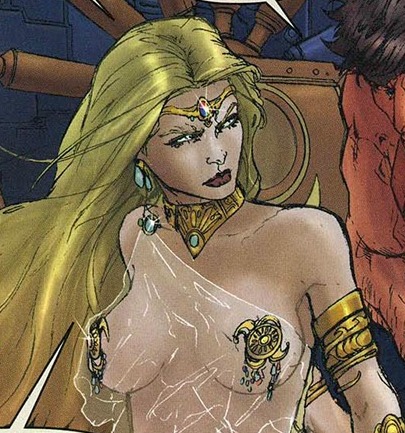 Matai Shang's daughter, she was introduced being captured by the First Born.

Jeddak of the Orovars in Horz.
Black Martians "The First Born"
Referred to as the very first race of men in Barsoom, the Black Martians trace their origins to 23 million years in the past, being the very first people to break from their egg shells. To the rest of Barsoom, they came from the nearest moon of Thuria but in reality, they dwell in the Lost Sea of Korus under Valley Dor, but they also inhabit the hidden stronghold of Kamtol in the great rift valley. The First Born are a proud people that consider themselves superior to all Martians.

Tropes related to the Black Martians

The Supreme Deity of Mars, she is in reality an very ancient female Black Martian.

A First Born Dator that first appeared in the second book to humiliate Xodar after he had fallen from grace. John defends Xodar by knocking out Thurid and severely wounding his pride. He joined forces with Matai Shang in Warlord of Mars, providing him with a secret entrance to the Temple of Issus where his wife Dejah Thoris is imprisioned, motivated to absolutely hurt the Earthman for humiliating him.

The Yellow Martians
Believed to have been wiped out by the Green Martians thousands of years ago, the Yellow Martians of Okar still live as recluses in the North Pole. They kept themselves hidden using their technology to bring down any ship or vehicle that came near, and due to the extreme conditions of their land, travel on foot is considered impossible. They lived under domed cities that protected them from the extreme cold, and the only two know city-states to exist are Kadabra and Marentina. Yellow Martians are noted for being very large and powerfully built as well as sporting beards.

Tropes related to the Yellow Martians

Jeddak of Okara, seated on the city of Kadabra.

Though he appears to be nothing more than a mere, old Yellow Martian lackey, Solan is a fearsome swordsman, arguably the best challenge faced by Carter in any of the books.
Other Characters

A Tarid princess that was kidnapped from Domnia, her home country and was made the wife of Ul Vas, Jeddak of Ombra. She tried to seduce John Carter into freeing her, but he turns down her advance, but still he vows to free her from her husband.

Tarid ruler of Ombra and an obstacle faced by the heroes while they are on Thuria.