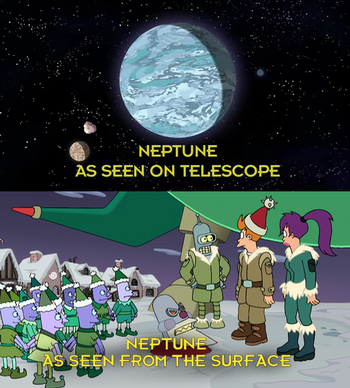 "You're not sure how you even landed on the surface of a gas giant. But it's probably best not to think about it for too long..."
— EVA report from the surface of Jool, Kerbal Space Program
Advertisement:

These days, it's pretty well known that the four largest planets in our solar system lack anything resembling "solid ground” in the conventional sense. The gas giants Jupiter and Saturn are primarily composed of a gassy atmosphere, and the ice giants Uranus and Neptune are mostly a mix of semiliquid methane and water misleadingly called "ices". Although they do have inner cores composed of solid rocky material, they are under so much pressure from the super-thick atmospheres above them that any landing attempts would be utterly impossible by modern technology. However, this was not widely understood until the mid-twentieth century, which has led some sci-fi authors to speculate that there might be solid ground under the cloud layers which might even support life.

While there are some massive exosolar planets - specifically, the rocky Super-Earths

- that may be capable of sustaining multicellular life, this trope is specifically concerned with gas giants being depicted as having a surface with native life, or at least one capable of supporting visitors.

A more common, recent adaptation of this trope is having the characters land/live on a moon of a gas giant— indeed the concept of terraformed or habitable moons of surface-less gas planets has become quite popular in media and pop culture, and is more scientifically plausible given the discovery of liquid oceans on Jupiter’s moon Europa.

If these planets are inhabited, it's Solar System Neighbors. Since these planets tend to have higher gravity than Earth their inhabitants tend to be Heavy Worlders. However, in some works, this aspect may also be ignored outright, and the high gravity not even mentioned. See Once-Green Mars and Venus Is Wet for other discredited models of other planets. For gas giant life that doesn't rely on a solid surface try Living Gasbag or Flying Seafood Special.