Western Animation / I Am Weasel 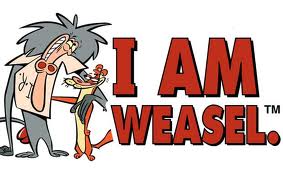 He is Weasel!
It would be my job... no, duty. FOR! I. Am. Weasel!
You don't need pants for the victory dance
'Cause Baboon's better than Weasel.
I. R. Baboon, big star of cartoon
"I AM WEASEL!"

I. R. Baboon reigns king in his mind
He's just as good as the weaselly kind
But 'round any corner he's likely to find
"I am Weasel! I am Weasel! I... AM... WEASEL!"
— Show's theme song, sung to the tune of "Pop Goes The Weasel"
Advertisement:

Originally appearing as the "B" segment in the A-A-B Three Shorts format of Cow and Chicken, I Am Weasel became a self-contained Spin-Off in 1999 shortly before the main cartoon's run ended, running for 79 episodes from then until 2000. When both shows ended and were put in reruns, they became their own separate shows, including frequent character crossovers (some of the Cow and Chicken shorts were later repackaged with the standalone Weasel shorts).

The show centered around a polite, hypercompetent, socially savvy weasel named I.M. Weasel (voiced by Michael Dorn) in his daily life attending to many people's needs. Weasel is incredibly accomplished in countless fields, including medicine, law, politics, music, science, and more. And behind him is his frenemy, the extremely dim-witted I.R. Baboon (Charlie Adler), who is envious of Weasel's talents and is constantly plotting to ruin him. Weasel is aware of this, but remains pals with Baboon anyway, possibly because he realizes Baboon is far too stupid to pose any real threat. After the first season, the Red Guy from Cow and Chicken also joined the main cast.

Consult the Cow and Chicken page for a recap of I.M. Weasel episodes.

In a TV bumper for his show, I R Baboon rubs his butt against the television screen for reasons unknown to the narrator, who admits that it at least cleans the glass.

In a TV bumper for his show, I R Baboon rubs his butt against the television screen for reasons unknown to the narrator, who admits that it at least cleans the glass.