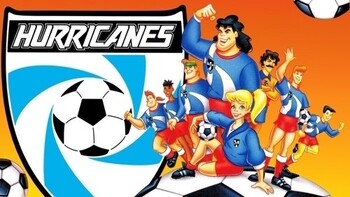 Hurricanes is an animated series created in the 1990s by DiC Entertainment, Siriol Productions and Scottish Television as an attempt to capitalize on the 1994 FIFA World Cup.

Teenage girl Amanda Carey inherited a soccer team (the Hispanola Hurricanes) from her father. She and the team travel to several locations across the globe to play soccer and/or solve mysteries while battling Stavros Garkos, owner of the Garkos Gorgons.