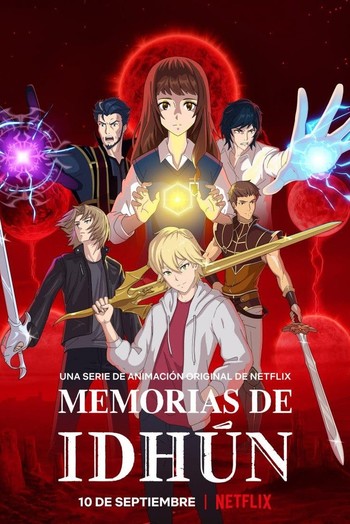 Based on the books by Laura Gallego
Advertisement:

In Silkeborg, Denmark, Jack comes home to find his parents murdered and the perpetrators, a young warrior and a sorcerer, hiding in the house waiting for him. He is saved by another warrior and a wizard, who take him away to Limbhad, a magical world where time has stopped and is always night and a place where he should be safe from the pursuers. A young girl named Victoria explains to him that his parents hailed from the world of Idhun, where three years earlier a necromancer named Ashran seized power, and he's hell-bent on finding and destroying all Idhunites who fled to Earth, sending out the two villains from earlier, Kirtash and Elrion, to do so.

To combat the threat, Jack will have to master his own powers under the watch of the two men who saved his life, warrior Alsan and wizard Shail, in order to join the Resistance against Ashran.

The first season, consisting of five episodes, premiered on Netflix on September 10, 2020; the second (and final) one was released to little fanfare on January 8, 2021.

Tropes seen on this show: