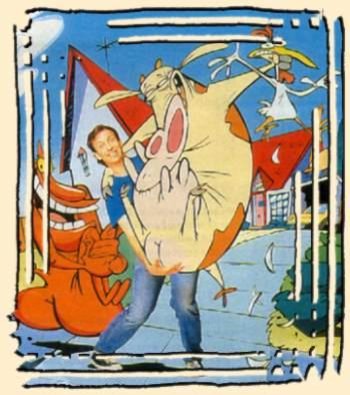 David Feiss (born April 16, 1959) is an American animator, best known as the creator of the classic Cartoon Network shows Cow and Chicken and I Am Weasel.

A native of Sacramento, California, Feiss joined Hanna-Barbera in 1978 while still a teenager, working on both The Smurfs and the revival of The Jetsons (eventually becoming a key animator on Jetsons: The Movie). There, he became acquainted with John Kricfalusi, who would later recruit Feiss to work on his own original series The Ren & Stimpy Show. Feiss would animate the pilot episode, "Big House Blues," and was an animator for the first two seasons.

Following his tenure on Ren and Stimpy, Feiss created the short No Smoking! for the What A Cartoon! Show. In 1997, the short became the series Cow and Chicken, of which he directed every episode and co-wrote several others, mostly in collaboration with Michael Ryan. The show's b-segment I Am Weasel, would eventually get spun off into its own show, of which he also directed every episode. His final project with Cartoon Network was the failed pilot Lost Cat in 2000 (allegedly only created so Feiss could get out of his contract and which neither party had an interest in picking up, not helped by arguments over copyright between Feiss and his ex-wife Pilar Menendez, who wrote the story).

In addition to his animation career, Feiss has collaborated with his cousin Sam Kieth on a handful of comic books. They first collaborated on a story featured in Parody Press's 1992 one-shot comic book Pummeler, spoofing Marvel Comics' famous character The Punisher. In issues #5 and #30 of Kieth's comic book The Maxx, David showcased his work with The Crappon (which looks like the Warner Bros. frog mascot Michigan J. Frog), Fred Flower and Uncle Italian Moose, which had a very similar style to Cow and Chicken (they are reprinted in WildStorm's The Maxx Volumes 1 and 5 trades).

Feiss was the creator of YooHoo & Friends, an attempt by Toonzone Studios to westernize the Korean cartoon of the same name. He also co-directed the animated segments of The Adventures of Hyperman, a computer game released in 1995 by IBM, as well as a handful of recognizable commercials for Kid Cuisine, Red Bull and Cheetos.

Beginning with 2006's Open Season, Feiss has had a steady career as both a story and storyboard artist on many animated features while occasionally returning to television.