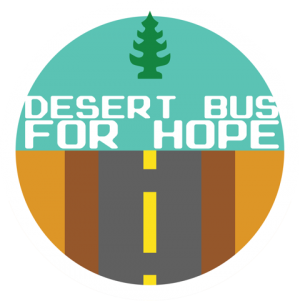 In 2007, Victoria sketch comedy group LoadingReadyRun organized a gaming marathon for the benefit of Child's Play

, a charity helping children's hospitals. The game used; Desert Bus, a bus-driving "verisimulator" that has the player drive from Tucson to Las Vegas (and back). This takes about 8 real-life hours. A one-way trip scores a point. The game cannot be paused. Going off the road or stopping results in the motor overheating and a tow truck dragging your bus back to the starting point in real time.
Advertisement:

And the bus veers slightly to the right so that the player can't just use something to automatically hold the driving button down.

To spare their sanity, LoadingReadyRun organized the fundraiser so that each consecutive hour "cost" 7% more than the previous hour, starting at US $1 for the first hour. So for them to continue playing after 5 hours, for example, $5.75 (or 1+1.07+1.15+1.21+1.31) would have needed to be donated by that time through the desertbus.org

But the real key to the success of Desert Bus For Hope is not the schadenfreude resulting from donating to a good cause to make gamers suffer, it's because they stream their experience live and have a dedicated IRC channel, which allows viewers to interact with the on-duty driver and attending hangers on. Plus, for enough money, fans can issue "challenges" to the team. This has led to all sorts of memorable shenanigans.