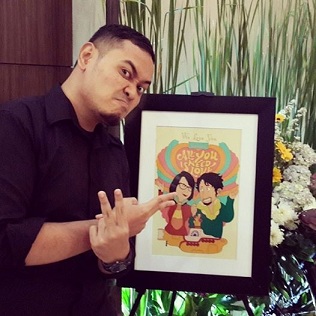 "The amount of f***d up things in this country is too damn high! KOSTUM must rise again!" one of his famous quote

Haryadhi Gee is an Indonesian cartoonist who lives in Tangerang, and is known for his ability to get many sponsors in relatively short time, and of course, his absurdly hilarious yet critically rich of moral message works.

His studies at Budi Luhur university enriched him with both political and common sense knowledge, which is crucially useful for his works, not to mention that he also knows a lot about Indonesian, Japanese, Korean, Indian, American and Mandarin pop culture. With all his academic and non-academic knowledge combined, he made a terrific amount of astonishingly hilarious moral satires.

His satirical style was insipired from another Indonesian Cartoonist: Benny Rachmadi and Muhammad Misrad. His works can be found here

No relation to Timothy Mcgee

or Assy Mcgee - though speaking of asses, Haryadhi's works have noticeable amount of raunchy humors.

Common tropes about him and his works: