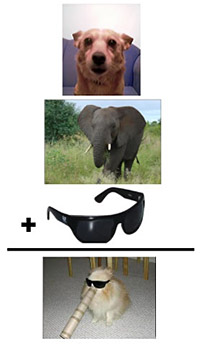 "We all use the teleporter let's say... six times a day. Times four years. Minus we're not bread."
— The Medic, Expiration Date

This is when a statement regarding real-world things is expressed as a mathematical equation, usually in the form of x + y = z to quickly tell you what you get when you mix x and y. Also common is writing an elaborate deduction on a blackboard or thought bubbles, but substituting a few terms, including the result, with pictures related to whatever the character is scheming.

Try not to think too hard about the implications of some of these. For example, Quantum Mariah Carey Problem is equal to this trope plus Fridge Logic.

Parallel to E = MC Hammer, when used to convey a setting or a character's skills, and may be derivative of Writers Cannot Do Math. See also Formula for the Unformulable.

Integral to Troperithmetic. Rebus Bubble is a subset of this. Not what Physics is.