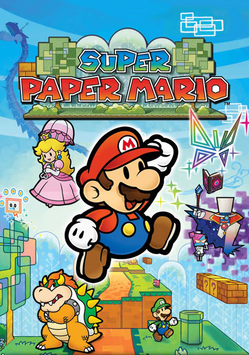 Bold new dimension, same old craft-action.
"Ahem! Today... I'll tell you the story of the lost book of prophecies. This prophetic book was a mysterious tome full of stories of future events. Of course, many people desired this book, wishing to glimpse their futures. But no person, after obtaining this amazing book, ever found happiness. The reason? The book held frightful secrets not meant for people's eyes. The book came to be called the Dark Prognosticus and was sealed away. This... is the tale of the forgotten book's last owner. It is a tale of love..."
Advertisement:

The third installment in the Paper Mario series of RPGs, Super Paper Mario (Wii, 2007) mixes it up a bit by being... well, totally different from its predecessors. Instead of being a turn-based RPG with action elements like the first two games, Super Paper Mario is a side-scrolling platformer with RPG elements. One of the most interesting features of the game is the ability to switch between 2D and 3D view at will—a lot of puzzles can only be solved in 3D, and switching to 3D will often show enemies and items that you couldn't see (or interact with) before.

The plot is noticeably darker than the previous entries. It is said that a book called the Dark Prognosticus exists that can tell the future. But no one who has found it could ever be happy again, for the book foretells the inevitable end of all existence. The Ancients were the keepers of this dark book, but one day it was stolen by former ancients who would create the Tribe of Darkness, who would watch over the book themselves and ensure it is never opened. However, a day came when it fell into evil hands...

Mario and Luigi hear that Princess Peach has been kidnapped (again) and go off to Bowser's Castle, only to hear that he didn't do it. At that moment, the real culprit, Count Bleck, appears with Peach and declares his intent to destroy all dimensions to replace them with perfect new ones, as foretold in the Dark Prognosticus he wields. He then takes Bowser, the Koopa Troop, and Luigi to his stronghold, Castle Bleck. Mario is left out cold until he is awoken by Tippi, a being called a Pixl in the shape of a butterfly who brings him to the town of Flipside, a place between dimensions. Here he meets Merlon, who holds the Light Prognosticus, a book created to counter the Dark Prognosticus and foretells of a group of heroes who will save existence. Meanwhile, Bleck forces a marriage between Bowser and Peach, summoning the Chaos Heart and causing a rift called The Void to appear, which Bleck plans to use to destroy all dimensions. Mario and Tippi must journey throughout dimensions and collect the Pure Hearts, which can counter the Chaos Heart, and fight Bleck and his strange team of villains—the Secretary Nastasia, the brutish O'Chunks, the shapeshifting Mimi, and the jester Dimentio—to save the multiverse... and, in the process, figure out just why Bleck seeks to destroy everything.

Yold Ruins is the final part of Chapter 1 and definitely fits the aesthetic.

Example of:
Temple of Doom

Yold Ruins is the final part of Chapter 1 and definitely fits the aesthetic.