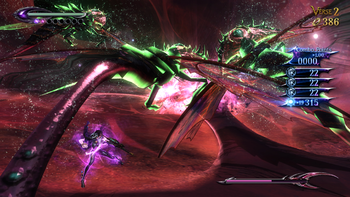 Those are darn big darners.
Advertisement:

Sometimes, authors become bored of the overwhelmingly common Giant Spiders and Creepy Centipedes and try to get a little more creative with their Big Creepy-Crawlies.

Dragonflies can fill the role to perfection. After all, they combine high-speed flight, toothed mandibles, and gigantic compound eyes. This makes them some of the most formidable predators among insects, being able to prey upon even small fish. They are also quite big for insects, and their younger life stages are just as deadly: dragonfly larvae are aquatic predators with extensible mandibles that burst out to capture prey, and they habitually prey on tadpoles and other small vertebrates. As such, giant dragonflies would be an incredibly terrifying sight for hapless humans, who would have no hope of outrunning them and surviving their teeth.