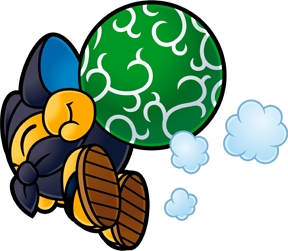 Kill it! Kill it before it gets away!
"Tasked with procuring Golden Eggs, Snatchers will emerge from the sea when Golden Eggs are present, and try to seize them and return them to the depths. Any snatched Golden Eggs can be retrieved by defeating this Salmonid before it returns to the water."
— Salmonid Field Guide, Splatoon 2
Advertisement:

While it's pretty common for RPGs to give your party a thief as a team member, or otherwise give the player an ability to swipe goods off an opponent during battle, it is relatively rare to encounter monsters or foes that do the same thing to you, even when you're specifically fighting thieves as opponents.

This is the occasional Mook who isn't interested in your party's demise so much as it is in your Bag of Holding. It may have a share of normal attacks, but it is unlikely to do any serious harm — its signature attack pattern is to swipe something from your Hyperspace Arsenal then disappear as quickly as possible, taking the stolen goods with him. Fenced goods may be gone forever if stolen, so for this reason it will (usually) interest itself only in items that can be easily replaced at local shops. After all, if the Bandit Mook randomly made off with your hard-earned MacGuffins and Plot Coupons, this could render your game unwinnable, and that would make players very angry.

Defeating a Bandit Mook frequently results in the immediate recovery of any stolen goods; but this isn't always the case, especially if it was just cash. (Exactly how it can keep you from physically looting its corpse is a mystery, but then again, it may be because Everything Fades.)

The obvious exemption from this trope is if an item (important or otherwise) is stolen solely because the plot demands it, like the MacGuffin Delivery Service.

Compare Mooks Ate My Equipment. May overlap with Harmless Enemy. Not to be confused with mooks who happen to be bandits in-story, unless they're also Bandit Mooks in gameplay terms too. Most tend to become Cowardly Mooks as well.