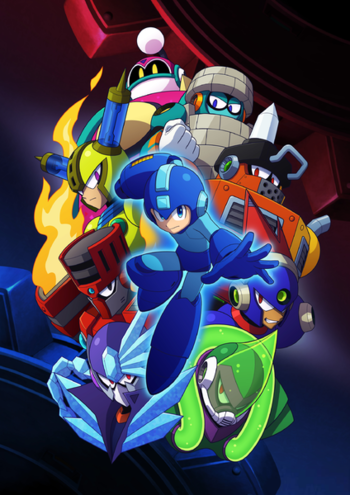 Mega Man 11 (Japanese: Rockman 11: Unmei no Haguruma!!, or "The Gears of Fate!!") is the eleventh mainline installment of the classic Mega Man series. It was announced on December 4, 2017 during the Mega Man 30th Anniversary stream. The game's graphics are 2½D, similar to Mega Man X8.

The story of the game revolves around Dr. Wily's so-called "Double Gear System" (one of the concepts on which he worked with Dr. Light in his youth), which augments robots' powers to unbelievable proportions at the risk of damaging their systems. In yet another bid to Take Over the World, Wily installs it into eight Robot Masters stolen while Dr. Light was checking on them. Realizing the threat that it could possibly unleash, Dr. Light installs a prototype copy of the system into Mega Man to give him a fighting chance against the rogue Robot Masters.

You can see the reveal trailer here.

The entire area is filled with moving lasers.

The entire area is filled with moving lasers.