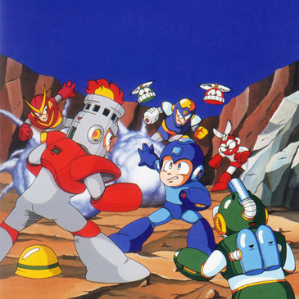 The Rock goes portable.
The first of five Mega Man (Classic) games for the Game Boy, Dr. Wily's Revenge (known as Rockman World in Japan) features the bare minimum of a plot, even compared to the other Mega Man games. In a nutshell, Dr. Wily is smarting at having his backside kicked in the first two Mega Man games, and has rebuilt four of the Robot Masters he built for the first game, and four from the second. And so, the Blue Bomber sets out to stop his arch-nemesis once again, unaware that Wily has a secret weapon intended to stop him once and for all — Enker, the "Mega Man Killer."
Advertisement:

In addition to being the first portable Mega Man game, Dr. Wily's Revenge was the first title in which Capcom outsourced the development to another company, namely Minakuchi Engineering, who would subsequently develop the third through fifth Game Boy outings (plus Mega Man: The Wily Wars note known as Rockman Mega World in Japan for the Sega Genesis and the Game Boy's version of Bionic Commando; Mega Man II was instead outsourced to Japan System House note later known as Biox). This paved the way for other third-party developers to handle future Mega Man outings.

Guts Man and Bomb Man sadly didn't make the cut for this or any other Game Boy game; this led to some degree of fan outrage, particularly with regard to the former (and likely led to him getting a Suspiciously Similar Substitute, Uranus, in Mega Man V).

The remaining four Robot Masters from 2 were held over for the following Game Boy outing.