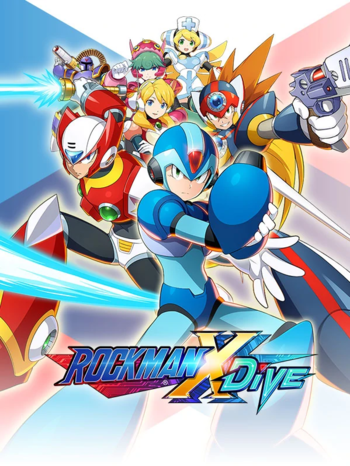 Mega Man X DiVE or Rockman X DiVE is a 2D action-platformer made with a modified engine from Mega Man: Maverick Hunter X and a game developed by Capcom Taiwan for iOS and Android. A "global" release handled by NebulaJoy was released in July 2021, officially only available in the US and UK, but planned for other western territories. Another English-localized release, this time on PC via Steam, happened in September 2021, though this version is based on the Taiwanese original rather than the version handled by NBJ.

Within the Cyber Space in a place called "Deep Log", which contains the game data information and the memories of the players who had played the Mega Man X games. There is a Deep Log for each game and player in the world, and they have been stored and managed for decades by RiCO, with the surge of unknown errors which are causing data corruptions. It is the job of the "Player" to repair the data and get rid of the errors in order to protect the Deep Log, using Hunter Programs to get rid of the Irregular Data.

While the game began with solely Mega Man X characters, over time more and more interlopers from other Mega Man subseries such as Mega Man (Classic), Mega Man Zero, and more have been added.

Playable characters include (in order of appearance with ranking, at the time of writing):