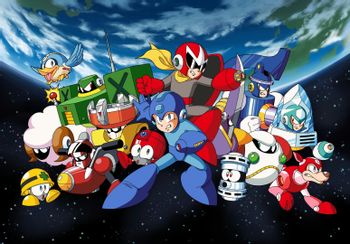 "I'm Mega, He's Proto, and we're putting a stop to the flu."
The tenth installment of the Mega Man (Classic) series. Like its predecessor Mega Man 9, it continues the trend of revisiting the series' roots with 8-bit graphics and music.
Advertisement:

In the year 20XX, an outbreak of a robotic virus known as "Roboenza" runs rampant across the globe. Roll becomes infected with the virus, and the situation becomes worse as time passes and a cure is not found. Several robots become berserk and attack cities across the world. One day, Dr. Wily's damaged UFO is caught from crash-landing by Mega Man outside Dr. Light's lab, and the scientist says that Roboenza-infected robots attacked him and stole the parts of a medicine-making machine he had been working on to cure the virus. Mega Man agrees to retrieve the stolen parts from the eight Robot Masters. Before he begins, Proto Man arrives to help Mega Man, believing the job to be too big for just one of them, and the two join forces to acquire the cure. Meanwhile, Bass sets out on his own to challenge these new robots.

This game is available through Mega Man Legacy Collection 2 for PS4, Xbox One, PC, and Nintendo Switch.

Do NOT confuse this with Mega Man X, which came out well before this game.