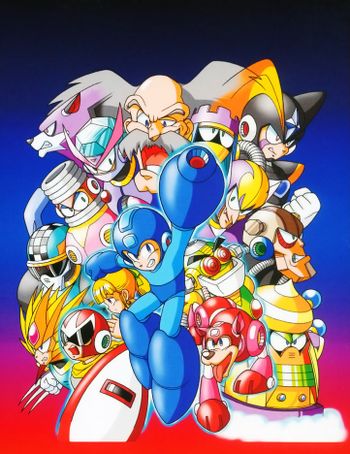 "My name is Mega Man

. I kicked Wily's ass once again..."note  Clockwise, from left to right: Slash Man, Turbo Man, Spring Man, Freeze Man, Burst Man, Shade Man, Junk Man, Cloud Man.
In The Year Of 20XX AD...The world cheered Mega Man when at long last he captured and imprisoned Dr. Wily. But...Dr. Wily knew his schemes might end in failure and had planned for just such an occasion. Four robots had been hidden away and after six months without being contacted by Dr. Willy, they activate and begin searching for their master...
—The Narrator
Advertisement:

The 7th entry and one of only three games (Mega Man & Bass was a case of No Export for You before its GBA port, and Soccer is considered non-canon) in the original Mega Man (Classic) series released for the Super Nintendo Entertainment System.

In the closing of Mega Man 6, Dr. Wily was finally put in jail. What Mega Man didn't know was that he had robots hidden somewhere in his lab. After six months without Dr. Wily's input, the robots would activate, and search for him.

The Robots gave a city a surprising attack, looking for their master. Mega Man and Dr. Light watch the robots help Dr. Wily escape from a far distance. Mega Man goes out to stop Dr. Wily. Along the way, he encountered Bass, another humanoid robot, and Treble, his mean robotic wolf. They are also trying to stop Dr. Wily. The battle began...

Though built using the same engine as the first Mega Man X, and featuring a similar emphasis on storyline, gameplay-wise Mega Man 7 has more in common with the line of Mega Man games previously released on the Game Boy, featuring two sets of four Robot Masters instead of eight from the start, along with the item shop featured in the fourth and fifth Game Boy outings, and Mega Man and the various other enemies being scaled more like their Game Boy sprites than their NES ones (though, thankfully, without the insane jumps that this often entailed in the Game Boy entries).

On a side note, a fan-made NES style remake of this game can be found online.

This game is part of the compilations Mega Man Anniversary Collection and Legacy Collection 2.