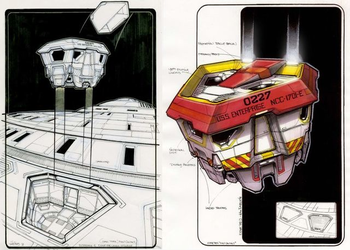 Concept sketch by John Eaves for the escape pods on the Sovereign-class USS Enterprise-E.
Lister: Rimmer, the escape pod is not an option.
Rimmer: Why not?
Lister: It escaped. Last Thursday. I was having a few beers. I didn't bother to get up, so I used the release mechanism as a bottle opener.
— Red Dwarf
Advertisement:

Sometimes called a Life Pod, it is a nearly universal trope in Space Opera, and a tried and true part of the Standard Sci-Fi Fleet. When your Cool Starship's Faster Than Light Drive is about to suffer a critical Phlebotinum Overload, or Space Pirates are targeting your exhaust port with Frickin' Laser Beams, it's time to head for the Escape Pods, and take your chances drifting on the endless ocean of space in a tiny, fragile shell with no weapons, rudimentary engines, and in cramped quarters with people you may not like.

Just hope the enemy doesn't decide to Sink the Lifeboats, that your Distress Call does not go unanswered, and that the Conveniently Close Planet you're forced to land on as your pod's limited supplies dwindle doesn't turn out to be a Death World.

The Escape Pod can come in handy should a Boarding Party of Scary Dogmatic Aliens announce that All Your Base Are Belong to Us, and you find it prudent not to question them. Similarly, keep it in mind if you ever find yourself on the wrong end of The Mutiny.

If you're ever stuck in a Supervillain Lair thoughtfully equipped with a Self-Destruct Mechanism, you may want to memorize the route to the nearest Escape Pod... just in case. A nearby Escape Pod may also prove convenient if you've been captured by the villain and are making an Air Vent Escape.

In a pinch, Escape Pods can be used for purposes besides evacuation — they provide a more humane alternative if you feel the urge to throw someone out the airlock, and on rare occasions might even be used to deploy your Space Marines. But in order for a pod to count as an example of this trope, its primary (or at least informed) purpose must be to serve as a science-fictiony life boat.

In Real Life, the International Space Station always has two spacecraft docked that can act as "escape pods" in case of emergency (these are also the same ships used to carry crew and supplies to the ISS in the first place). Rockets carrying astronauts also have an eject system that can separate the crew module from the rest of the rocket in case something goes wrong during launch. However, as commonly portrayed in science fiction, the use of escape pods does not always make sense. As writer and game designer Jim Cambias put it:

Advertisement:
"Why abandon a spaceship, however shot up or meteor-damaged it may be, just to hang around in a flimsy balloon or cramped pod? You're still on the same course, since no life pod can carry much delta-v, and the life-support problems are considerable. Why not include some kind of pressure balloon to provide temporary airtight containment in a hulled compartment and use the ship's own life support? That way you get the ship's radiation shielding, power, etc.
"If it's a reactor emergency you're worried about, don't eject the crew in pods, EJECT THE REACTOR!
"Actually, I realize perfectly well the purpose of life pods: it lets sf writers tell lifeboat stories in space."

Of course, in science fiction, stricken spaceships more often than not blow up like firecrackers — so trying to get away in an Escape Pod makes enough sense. Other justifications may include facing a Worthy Opponent who can be trusted not to Sink the Lifeboats but has no problem utterly destroying your Cool Starship, or avoiding a Reentry Scare if your damaged ship can't survive entering a planet's atmosphere, but your escape pods can (or they do have engines powerful enough to aim for the safety(?) of space). It is also a way to show surrender — essentially giving up your ship so the other party can have it. Deadly Escape Mechanism occurs when the escape pod kills its occupants.

Contrast the Boarding Pod, which is for getting onto the ship in a hopefully unexpected manner. Compare Disposable Vehicle Section when you still want to escape with most of your vehicle intact, and Drop Pod and Drop Ship for other small ships that detach from bigger ones and are designed for atmospheric entry in non-emergency situations.

At the end of the episode, after Peter manages to get Francis a job with the Pope, his mother shows up needing a place to crash. The Griffins' response is to jump into an Escape Pod similar to the one in Star Wars and fly away.

Example of:
We Are Not Going Through That Again

At the end of the episode, after Peter manages to get Francis a job with the Pope, his mother shows up needing a place to crash. The Griffins' response is to jump into an Escape Pod similar to the one in Star Wars and fly away.