Series / For All Mankind 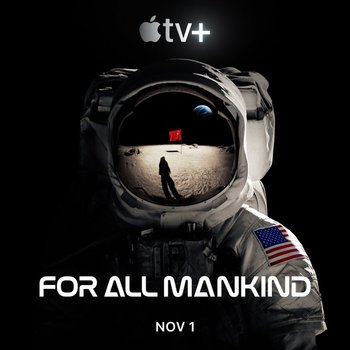 The past is gone...
"I take this step for my country, for my people, and for the Marxist-Leninist way of life, knowing that today is but one small step on a journey that will take us all to the stars."
—Alexei Leonov, taking the first step on the moon, June 26, 1969
Advertisement:

For All Mankind is a live action Historical Fiction and Alternate History TV series on Apple TV+, created by Ronald D. Moore, Matt Wolpert, and Ben Nedivi. It shows a fictional history of the Space Race where the Soviets landed on the moon before the Americans. NASA finds themselves scrambling to meet or exceed the Russians, including training female astronauts and creating a lunar base. Moore has reportedly planned out an entire seven season story arc in advance.

Has a character page and a timeline under construction.

For All Mankind provides examples of:

After the disastrous ignition of Apollo 24 which resulted in Molly Cobb getting thrown away from 25, Tracy has to try and rescue her commander.

After the disastrous ignition of Apollo 24 which resulted in Molly Cobb getting thrown away from 25, Tracy has to try and rescue her commander.