You may be looking for the 2006 game Prey, by Human Head Studios. 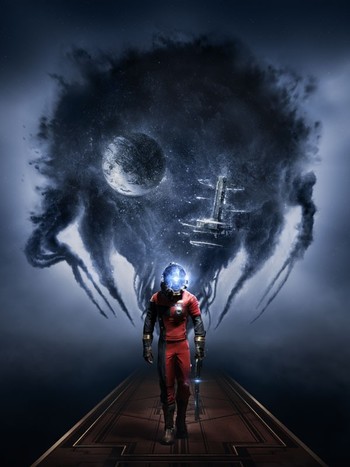 "This isn't a dream. It's a nightmare."
"Good morning, Morgan. Tough day, right? I know if I'm talking to myself it must be..."
— Morgan Yu
Advertisement:

Prey is a 2017 Psychological Thriller Sci-Fi First-Person Shooter/Immersive Sim developed by Arkane Studios and published by Bethesda. The game was released on May 5, 2017 for the PlayStation 4, Xbox One and PC. Not to be confused with the identically named 2006 game, Prey. The game's development was led by then-CEO and director Raphaël Colantonio and his team in Austin, with Chris Avellone working on the project.

You take the role of Morgan Yu, Director of Research and a key subject of morally dubious experiments designed to improve the human race for the TranStar Corporation. In 2032, you are recruited by your brother to serve aboard the Talos I space station, but during some some suspicious preliminary tests you and the scientists testing you are attacked by shapeshifting aliens known as the Typhon. You wake up in your apartment where it is revealed that it is actually 2035, and that you have actually been living in a simulation aboard the Talos I for the past three years. Now you must uncover the secrets hiding in the depths of the space station while being hunted by the mysterious alien force that has taken over. You’ll have to rely on the tools you find on the station — along with your wits, weapons and mind-bending abilities — to combat the growing threat and hopefully survive.

The History of TranStar.

Base game
"I told you you wouldn't like it..."
Mooncrash 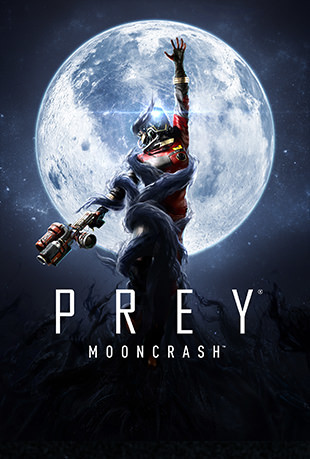 A DLC to Prey, similar to the Daud duology of the original Dishonored. The game follows Peter, a hacker stationed on a spy satellite tasked with intercepting TranStar communications. When the company's moon base goes quiet, it's up to him (with the help of TranStar rival KASMA Corp) to figure out why, through simulations of various TranStar employees — if he can survive that long, anyway.

Mooncrash is notable for its randomly-generated settings, with different goals, enemies, and loot to be seen in each playthrough, ensuring no two experiences will be the same.